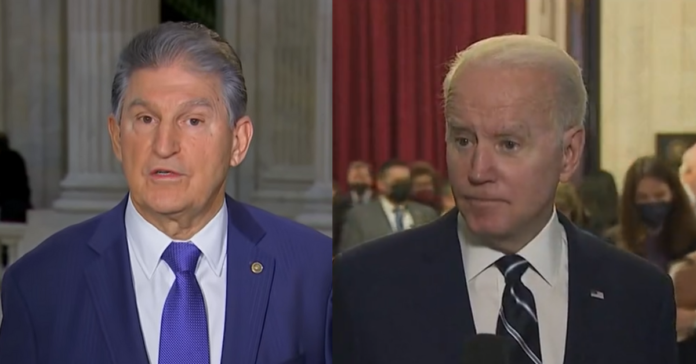 It is a shocking form of political malpractice for Biden’s staff to keep putting him in positions to lose because what they don’t realize is the image of a loser is hard to shake. Getting dubbed a loser is hard to shake and that is what people think of when they hear Biden’s name. Remember too that he is suffering defeat after defeat from his own party.

We probably have never seen such incompetence from an administration in American history and they have been hiding Kamala and Biden from the media for the most part. So it will get a lot worse the more we learn about these two dunces.

Why did Joe’s team make Biden go give a hysterical speech to then go demand the Senate pass his bill knowing the entire time the mission was doomed? The answer will be one for historians to discover after Biden serves one failed term.

Manchin said again that he won’t break the filibuster dealing Biden a humiliating loss after a series of losses.

“In May 2010, just a month before he died, Senator Robert C. Byrd was asked by then-Chairman Chuck Schumer to testify about the filibuster before the Senate Rules Committee because of his ‘unsurpassed knowledge’ on the subject. Senator Byrd began by quoting James Madison. Madison said that the purpose of the Senate was ‘first, to protect the people against their rulers, secondly, to protect the people against the transient impressions into which they themselves may be led,’ and that the Senate serves as a ‘necessary fence against such danger.’

“Senator Byrd testified that, ‘the right to filibuster anchors this necessary fence.’ He concluded with, ‘We must never, ever, ever, ever tear down the only wall, the necessary fence, that this nation has against the excesses of the executive branch and the resultant haste and tyranny of the majority.’

“Senator Byrd’s insight helped explain why at no time in the history of the United States has the Senate been able to end debate on legislation with a simple majority. To be clear, prior to 1917, there was no mechanism for ending debate in the Senate. Even after the cloture rule came into effect 105 years ago, it has never provided that debate on legislation could be ended by a simple majority vote.

“This has been the case even as the nation has faced a multitude of national crises, including depression and war.

“Throughout the last decade or more, there has been broad bipartisan support for protecting the filibuster, including current and former members of the Senate. Just four years ago, sixty-one Senators, thirty-three of which were Democrats, sent a letter to Senators Chuck Schumer and Mitch McConnell warning them of the dangers of eliminating the filibuster.

“That letter presented a united front committed to, ‘preserve the ability of members to engage in extended debate when bills are on the Senate floor.’ While some of them have changed their position, I have not.

“Respect is a two-way street – I respect that they have changed and I would hope they respect that I have not. The ability to debate and do the hard work to find consensus between to two parties is more important for our country now than ever before with the Senate evenly divided.

“While many try to ignore this history, they do so without fully understanding the long-term institutional and democratic damage this will do to the Senate and our nation.

“Allowing one party to exert complete control in the Senate with only a simple majority will only pour fuel onto the fire of political whiplash and dysfunction that is tearing this nation apart – especially when one party controls both Congress and the White House. As such, and as I have said many times before, I will not vote to eliminate or weaken the filibuster.

“The filibuster plays an important role in protecting our democracy from the transitory passions of the majority and respecting the input of the minority in the Senate.

“Contrary to what some have said – protecting the role of the minority, Democrat or Republican, has protected us from the volatile political swings we have endured over the last 233 years.

“The role of the minority is what ensures the policies of our nation have input from all corners of the country. We must never forget that the Senate governs for all 50 states, not just red or blue states.

“For those who believe that bipartisanship is impossible, we have proven them wrong. Ending the filibuster would be the easy way out. I cannot support such a perilous course for this nation when elected leaders are sent to Washington to unite our country by putting politics and party aside.

“It is time we do the hard work to forge the difficult compromises that can stand the test of time and deliver on the promise of a brighter tomorrow for all Americans,” Manchin said.

Biden Smirks When He Refuses to Answer Basic Question from Reporter