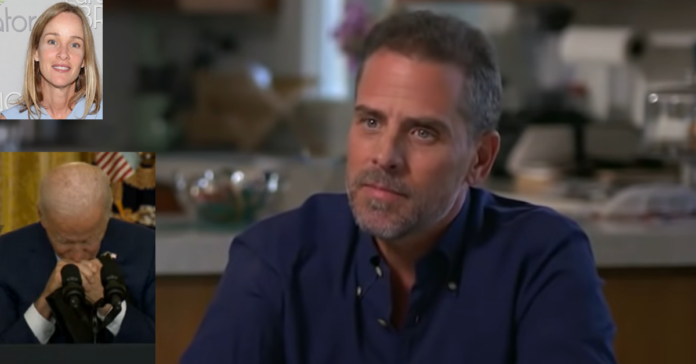 Hunter Biden’s ex-wife plans to get her revenge for what Hunter did to her (it was bad) and will spill the beans about the many Biden family scandals in her new tell-all. Hunter is a walking scandal and Kathleen Buhle plans to expose him for all the world to see.

Buhle’s “If We Break: A Memoir of Marriage, Addiction, and Healing” will be published a few months before the absolutely critical midterms. The publisher describes the book as a “page-turning and heartbreaking” account of “why she kept so much hidden, from her daughters and herself, for so many years.”

Buhle said: “Writing this book has been incredibly healing for me and my hope is it will be meaningful to those who have been through addiction or divorce, and especially to women who have felt like their entire identity was tied to their spouse. In the end, divorce allowed me to find my strength.

“When my marriage ended, I felt like I’d lost my sense of who I was. Anyone who has seen addiction ruin a relationship, or been through infidelity and divorce, can tell you how devastating it feels. But what I also realized through those crushing experiences is that I needed to find a way to stand on my own.”

Not only did Hunter cheat on Buhle with hookers and lose a tremendous amount of their money on drugs, Hunter also started a shady affair with his dead brother’s wife. Beau Biden died and Hunter took up with the widow. While he was married to Buhle.

Try explaining that to your kids or your friends. Who would do that especially while married? Hunter that’s who and the story is an ugly one to be sure.

He also knocked up a stripper and then went to South Africa, probably to dry out and to get him away from any media attention, and while there he married some girl he met for like a week. They are still married but the amount of humiliation Hunter put this woman through deserves payback and it looks like she will get it.

Buhle’s book, meanwhile, “tells her own story from her working class roots on the South Side of Chicago to losing her maiden name and a part of herself in becoming Kathleen Biden, to finding a renewed sense of identity, purpose, and joy after the devastating collapse of her marriage,” according to her publisher.

The cover of If We Break features a photo of Buhle and Hunter, taken during a 2014 family trip to Nantucket for Thanksgiving.

The couple had reportedly finalized their divorce in Washington, D.C., by April 2017, settling “all questions relating to custody, support, property rights, and all other rights” in a confidential agreement.

Six weeks prior to his divorce with Buhle being finished, Hunter revealed that he was in a relationship with Hallie, Beau’s widow. Beau died in May 2015 of brain cancer.

Kathleen Buhle talked about how addiction can ruin relationships as she gears up for the release of her memoir, due out June 14.

“What I also realize through those crushing experiences is that I needed to find a way to stand on my own.”https://t.co/y6EESzvxA7

Dr. Fauci Caught Losing it On Hot Mic – He Could Lose America’s Trust After They Hear Him Mutter Under His Breath “Moron”