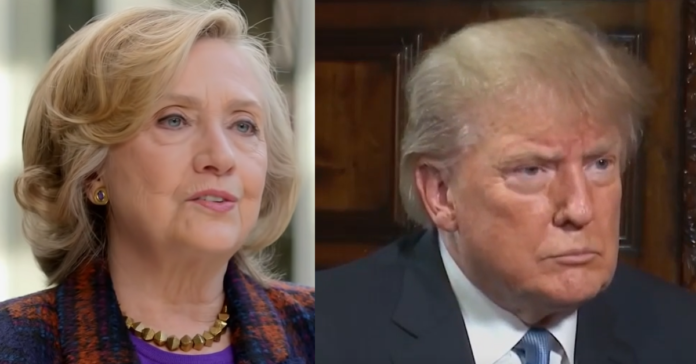 Two Desperate Dem political operatives are calling Hillary Clinton the ‘best option’ to beat former President Donald Trump in 2024 as President Joe Biden and Vice President Kamala Harris flail from one debacle to another with their heads in the sand.

Douglas E. Schoen and Andrew Stein predicted the Dems would turn to Hillary to face Trump because they have no one else.

Writing in the Wall Street Journal they claimed that ‘A perfect storm in the Democratic Party is making a once-unfathomable scenario plausible: a political comeback for Hillary Clinton in 2024. Several circumstances—President Biden’s low approval rating, doubts over his capacity to run for re-election at 82, Vice President Kamala Harris’s unpopularity, and the absence of another strong Democrat to lead the ticket in 2024—have created a leadership vacuum in the party, which Mrs. Clinton viably could fill.”

They continued: “Given the likelihood that Democrats will lose control of Congress in 2022, we can anticipate that Mrs. Clinton will begin shortly after the midterms to position herself as an experienced candidate capable of leading Democrats on a new and more successful path.”

Those devastating factors could lead to a ‘power vacuum’ for Clinton to step into, the op-ed claims.

Democrats’ unpopularity as the majority party in Washington puts them on track to lose the midterms, according to multiple projections.

Clinton, whose husband former President Bill Clinton was the Democrat governor of deep-red Arkansas, urged her party in a recent interview to think ‘about what wins elections, and not just in deep-blue districts where a Democrat and a liberal Democrat, or so-called progressive Democrat, is going to win.’

Being younger than Biden already gives her an edge, but Clinton ‘can use the party’s loss as a basis to run for president again, enabling her to claim the title of “change candidate”,’ the left-wing experts write.

A spate of recent news media interviews have already signaled Clinton has her thoughts, if not her eyes, on future elections.

Worse than whispers of Hillary’s imminent comeback for Biden is finding an answer to inflation. If he doesn;lt find a way to slow it down he will lose a primary challenge let alone a general election.

Inflation has become one of the top economic issues in the U.S., and the Biden administration is acting accordingly with various policy actions.

U.S. consumer prices rose 0.5% in December and 7.0% on a year-over-year basis, according to the Bureau of Labor Statistics. It’s the fastest rate since 1982.

Two of the biggest drivers of price spikes over 2021 have been in food and energy which is likely the reason the White House has focused on both of those sectors both for inflation as well as antitrust reasons.

Tying the two issues together is not without critics, even among Democrats. Former Treasury Secretary Larry Summers posted a lengthy Twitter thread taking issue with “[a]ntitrust as an anti-inflation strategy” and has noted that Biden officials “flirt with the idea that it’s greedy meatpackers causing inflation.”

From @WSJopinion: If Democrats want a fighting chance at winning the presidency in 2024, Hillary Clinton is likely their best option, write @DouglasESchoen and Andrew Stein https://t.co/umP30AP1Ra