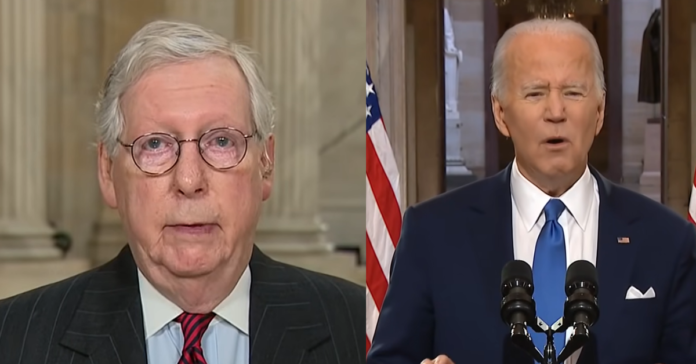 Senator Mitch McConnell put President Joe Biden and Chuck Schumer on notice over the Dems push to change the filibuster rules warning the move will backfire. Senate Republicans threatened to simply use the weakened rules to hijack the Senate agenda right out from under the hapless Dems.

They will force tough votes for swing state Dems and work with Joe Manchin to pass some GOP initiatives if the Dems make changes. The list includes the Keystone XL pipeline, abortion, a U.S-Mexico border wall among others.

“Since Sen. Schumer is hellbent on trying to break the Senate, Republicans will show how this reckless action would have immediate consequences,” Senate Minority Leader Mitch McConnell (R-Ky.) said in a statement first reported by The Wall Street Journal.

“We have a lot of bills, actually, that have bipartisan support that Democrats have expressed support for previously.”

If Democrats blow up Senate rules, millions of Americans will cease to have a voice in the Senate. Entire states would be shut out.

Top Dems have floated breaking the rules for years now. This isn’t about new voting laws. It’s about silencing voters who inconvenience Democrats.

Thune said if the Dems change the 60-vote threshold the GOP will move quickly on a bunch of bipartisan bills that “would be available to get called up with a simple majority.”

He added a warning that these “could be some really hard votes for Democrats.”

Thune said: “What they’re talking about doing — we’ve said this before — is not without consequence, and they know it.

They need to think long and hard about whether or not they want to go down a path that allows Republicans to move items on our agenda at 51.:

Two Democrats, Manchin and Sen. Jon Tester (Mont.), in February voted for an amendment to the budget reconciliation to resurrect the Keystone XL project. The amendment was adopted by a vote of 52-48 before later being stripped out of the resolution.

While the bills would still need 60 votes to advance to final passage, lowering the threshold to begin debate could open up vulnerable Democrats such as Sens. Raphael Warnock (Ga.), Mark Kelly (Ariz.) and Maggie Hassan (N.H.) to a slew of tough votes.

The GOP listed a few bill they have ready to go should the Dems follow through and change the rules for the filibuster.

Other candidates for action include a proposal sponsored by Sen. Shelley Moore Capito (R-W.Va.) to codify the Trump administration’s revised Waters of the United States rule, which the Biden administration said in November it would scrap.

The Environmental Protection Agency and the Army Corps of Engineers announced in November the restoration of an Obama-era rule expanding the number of waterways protected under the Clean Water Act.

Another proposal sponsored by Sen. Marco Rubio (R-Fla.) would bar money appropriated under the 2020 CARES Act or the 2021 American Rescue Plan from going to public elementary and secondary schools that aren’t open for in-person learning.

A third proposal sponsored by Sens. Thom Tillis (R-N.C.), John Cornyn (R-Texas) and Tom Cotton (R-Ark.) would prohibit the Department of Justice from paying settlements to illegal immigrants detained at the U.S.-Mexico border.