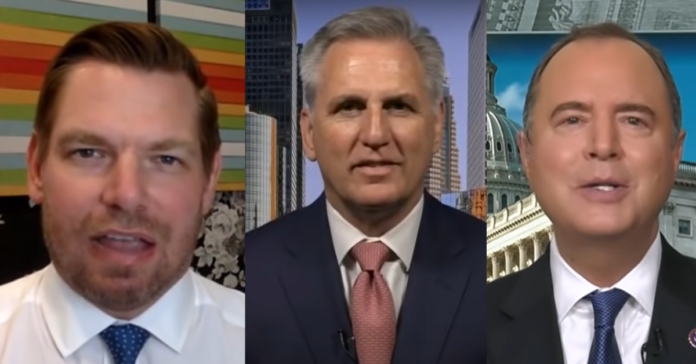 Kevin McCarthy sat for an interview to discuss the impending red wave the GOP will ride to huge gains in the 2022 midterms and promised to remove Adam Schiff, Eric Swalwell, and Ilhan Omar from their committees once he is the speaker.

He said: “But what the Democrats are doing is trying to divide us. They go and they punished Marjorie for something she did before she was even a member. Where did that standard ever come from? They never hold their own members accountable. This is the difference in the new Congress. The things the Democrats have done, that Pelosi has done, is burning this House down as she walks out the door.

“She has taken away the minority’s right to have an amendment with a motion to recommit. She said bills didn’t have to go through committee. She brought proxy voting so members don’t even have to show up to work to get paid. You got Democrats sitting on boats that are voting.”

“I have a different view. I don’t think majorities are given, I think they are earned. I think you also should be very truthful to the American public about what would you do with that majority.

“We should show the American public so when the American public goes to vote, they can have a decision on which path do they want to go on? This one-party rule that’s brought us inflation, open borders, unsafe communities, and a supply chain where products are scarce, or do we want something that’s going to make our economy stronger, our streets safer, our border secure, and the next century the American century?

“Let them make a decision. But then it also holds our feet to the fire and holds us accountable. If we promise to do this, we need to go do this.

“Any time you have an election that has contrast, clear contrast—like, if Republicans were trusted with the majority, what would you do?

“We’ll come out with a Commitment to America. What we’ve been doing for the last year is all the members are on task forces. We’ve been working on policy.

“We recently rolled out a parents’ bill of rights. You look at what happened in Virginia, where the Democrats don’t believe the parents should have a say in their kids’ education, we say that’s wrong.

“We give you a parents’ bill of rights to guarantee you have a say so you know what’s being taught and what’s being read and where’s your money being spent.

“We give you a parents’ bill of rights. When the border came out, we had a five-step how to secure the border. When you watch how to deal with China, we came out with a five-step program on how to deal with China to know where COVID came from and release all the intelligence, don’t go to the Olympics, stop gain-of-function from going to any other country, holding them accountable.

“If we released all of the intelligence, all the other countries would have it as well to know where this COVID started and originated from. We’re just going to have the party of the ideas, the party of the parent, and what we’re going to do is you’ll find later this year we will roll out a Commitment to America—a clear contrast on what our policies are versus the one-party rule. We’ll secure the border.

“We’ll stop the inflation and runaway spending. We’ll make your streets safe because we don’t defund the police. We fund police. We stop this releasing everybody out on bail. You’ll find we’ll make America energy independent.

“We’ve done it before and we’ll do it again. When we do that your gasoline price will lower and your home heating price this winter, which is going up 50 percent, will be lower. And you know what? More Americans will have jobs because of it. These are just a few of the things we’re rolling out.”

“The other thing you want to look at is retirements. Members, if they start retiring, they understand what’s going to happen. Remember what history says. Since World War II, whichever party wins the White House, Republican or Democrat, on average they’ve lost 28 seats in the next election.

“Only two times that didn’t happen since World War II, after we impeached Clinton and after 9/11—two special cases. Well, 28 seats are a lot. In 2010, when you know we won 63 seats, only 17 Democrats retired. In the last election cycle, we targeted 55 Democrats and only one of those 55 retired.

“Did you know by December they broke the record of 2010 retirements? There were 19 Democrats retiring as of the beginning of December. So, what we’re seeing is the Democrats know what’s going to happen as well.”

“All those things are lining up, and so what that means is there is an opportunity here. But there’s something different, it’s almost like a perfect storm and it probably won’t happen again for another 50 years where you have the party in power with a small majority for the first time in a hundred years of five seats, they just won the White House so history says they should lose seats, the generic ballot where it is, and redistricting.”