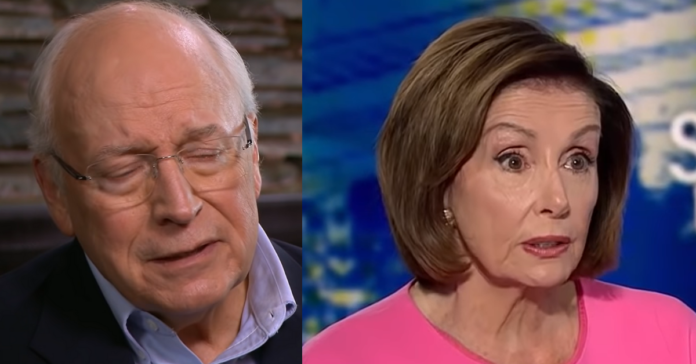 Matt Taibbi, one of the most respected reporters in the game, issued a warning against the unholy alliance building between Nancy Pelosi and Dick Cheney. Taibbi wrote:

“Former Vice President Dick Cheney visited the House of Representatives yesterday. He and his daughter Liz were the only two Republicans present at a moment of silence commemorating the events of last January 6th. It was a touching scene, which perfectly described why the surviving anti-Trump Uniparty of the political mainstream is at least as much of a threat to democracy as the “insurrectionists” they never stop wailing about.

“I don’t mean to understate the seriousness of January 6th, even though it’s been absurdly misreported for over a year now. It was no heroic storming of the Bastille. January 6th was a massive LARP that got out of hand. The reason it wasn’t worse is because Trump has also been constantly mislabeled as a Hitler, Stalin, or Pinochet. Even if he wanted to overturn “democracy itself” — I don’t believe he does, but let’s say — Trump has proven over and over he lacks the qualities a politician would need to make that happen.

“Which brings us back to Cheney. All those things Trump is rumored to be, Dick Cheney actually is. That’s why it’s so significant that he appeared on the floor of the House yesterday to be slobbered over by the Adam Schiffs and Nancy Pelosis of the world.

“Dick Cheney did more to destroy democracy in ten minutes of his Vice Presidency than Donald Trump did in four years.

“The second emergency of course is the pandemic, which ought to have been exhibit A in Trump’s uninterest in being a dictator — he could have legally invoked all sorts of powers and did not.

“Instead, it’s become part of a widening propaganda campaign designed to enlist the wine-cave MSNBC set behind full-blown Big Brother governance. Remember our Health and Human Services Secretary saying last summer, in advance of a “door-to-door” campaign that was supposedly about urging people toward the jab, that “it absolutely is the government’s business” to know who’s vaccinated and who isn’t?

“Or, have you noticed the total lack of interest among pundits and politicians in distinguishing between anti-vaxxers and people who merely have anti-mandate or anti-passport attitudes? It’s all the same obstructionism to them.

“Where have we seen this style of intentional line-blurring to justify the expansion of executive authority before?

“From Cheney, who took emergency politics to places even a sober Joe McCarthy could never have dreamed of.

“On the pretense that new powers were needed to combat the sweeping global threat whose existence 9/11 supposedly proved, Cheney institutionalized executive assassination, torture, mass surveillance, secret prisons, secret budgeting, and the wholesale elimination of congressional oversight over most of his program, turning the world into what one Pentagon adviser who talked to Seymour Hersh back in the day called a “global free-fire zone.”

“The core principle of Cheney’s politics was protecting his new bureaucracies of murder and open-ended detention from legal challenge.

“That meant creating structures that were legally invisible. Are you on a watch list? Has the FBI sent out a National Security Letter to your telecom provider? Have you been approved for “lethal action” and put on the “distribution matrix,” a.k.a. the kill list?

“Even members of congress were often unable to find out about whole ranges of programs unless an accident like the Edward Snowden revelations came their way.

“Worse, one of the people who was kissing Cheney’s ring yesterday, House Intelligence Chair Adam Schiff, not long ago beefed up a similar law called the Intelligence Identities Protection Act (IIPA) that would make any journalist who revealed the name of a covert agent engaged in assassination or torture, even long after the fact, subject to prosecution.

“This from a man, Schiff, who is the co-chair of the Congressional Freedom of the Press Caucus!

“This is not the same as revealing classified information (there are different laws for that). Widespread application of this law, or the IIPA, would essentially criminalize reporting on state wrongdoing, which was exactly the CIA’s point in arguing for such measures.

“Before the Cheney era, the vast majority of us would have considered such thinking repellent and anti-American.

“In the last five years especially, though, Democrats, former security officials like John Brennan, and ex-Republicans like David Frum and Bill Kristol have pounded the table for this logic as more necessary than ever.

“They claim, as Cheney did, that not only are some threats so dire that extraordinary vigilance is necessary, but that the nature of those threats is such that counter-operations against them must not ever be corrupted by due process or oversight.

“This is why these people can’t be trusted with policies like vaccine passports and/or Merrick Garland’s plan to “methodically track” what he called “violent extremists” and domestic terrorists in the wake of 1/6.

“The latter idea is particularly troubling given that no one connected with that incident has been charged with anything like terrorism, for the simple reason that what happened wasn’t terrorism.

“The potential applications for a souped-up domestic version of Cheney’s still-extant watch lists are horrific to consider. Are we going to widen the circle of people who will mysteriously find themselves unable to get bank accounts, transfer money, or attend schools?

“Do we want to leave it up to the White House to determine what’s reporting and what’s “obtaining national defense information,” particularly if they start stretching the concept to cover revelations about the pandemic?” he wrote.

I’m unlocking this article about Dick Cheney and 1/6, “A Tale of Two Authoritarians”: https://t.co/is5gNtduKs