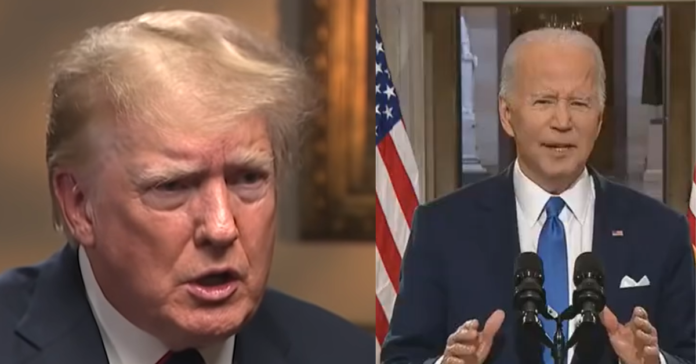 Former President Donald Trump fired back at President Joe Biden today after Biden went after Trump early and often during his speech on Jan 6. Biden said:

“The former president of the United States of America has created and spread a web of lies about the 2020 election. He has done so because he values power over principle, because he sees his own interest as more important than his country’s interest, America’s interest, and because his bruised ego means more to him than our democracy and our Constitution. He can’t accept he lost.

“The former president’s supporters are trying to rewrite history. They want you to see Election Day as the insurrection. Can you think of a more twisted way to look at this country, to look at America?”

“No election in American history has been more closely scrutinized or more carefully counted,” he added.

When asked by a reporter if his speech was divisive Biden said:

“The way you have to heal you can’t pretend. This is serious stuff. You got to face it. That’s what great nations do. They face the truth, deal with it, and move on.”

“This political theater is all just a distraction for the fact Biden has completely and totally failed.

“Biden, who is destroying our Nation with insane policies used my name today to try to further divide America.

“Biden is working hard to try and deflect the incompetent job he is doing, and has done, on the horrible Afghanistan withdrawal (surrender), the Borders, COVID, Inflation, loss of Energy Independence, and much more. Everything he touches turns to to failure.

“Due to inept leadership that gave us open borders, COVID incompetence, loss of energy independence, a military in chaos, rampant inflation, corrupt elections, and lack of world standing, our Nation, perhaps for the first time, has lost its confidence!”

Reporter: “Does calling [Trump] out divide more than it heals?”

Biden: “The way you have to heal, you have to recognize the extent of the wound.” pic.twitter.com/fAo8br8MBo

Biden: “He’s not just a former president. He’s a defeated former president — defeated by a margin of over 7 million of your votes in a full and free and fair election.” pic.twitter.com/3UglDMpAlp

Reporter: “Why didn’t you say President Trump by name?”

Biden: “Look, I think we just have to face the facts, what happened.” pic.twitter.com/Qb4YQ9kL65

Biden is an utter embarrassment and this humiliating video proves it