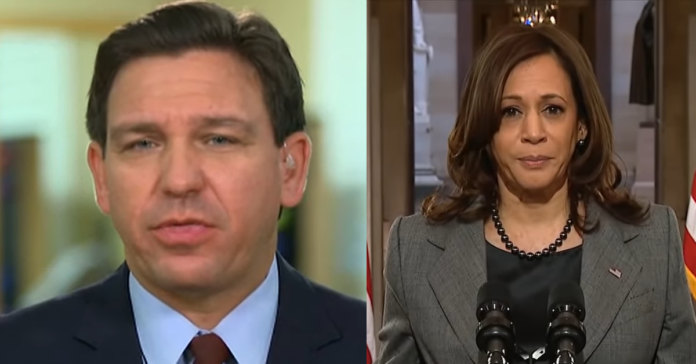 Florida Gov. Ron DeSantis rebuked Vice President Kamala Harris and others who compared Jan 6 2021 to the Sept. 11, 2001, terrorist attacks saying it is “an insult to the people that were going into those buildings.”

DeSantis said: “It’s interesting how everything in our society becomes very politicized, and so today – honestly, I’m not going to watch any of it – you’re going to see the D.C./New York media, this is their Christmas, Jan. 6.

“They are going to take this and milk this for anything they could to smear anyone who ever supported Donald Trump. I just look back and compare when I was in Congress, one event we faced was the attempted assassination of Republican members of Congress during a baseball game.

“I was actually on the field. The guy, who was a Bernie Sanders guy, was definitely a politically motivated attack, came up, pulled his van, and we didn’t think anything of it.

“The DC, New York media— this is their Christmas, January 6th,” says ⁦@GovRonDeSantis⁩, commenting on last year’s attempted insurrection at the US Capitol. Says anniversary will be used to “smear anyone who ever supported Donald Trump.” pic.twitter.com/3xMXZJGoif

“We walked out to go to the car, and we came in contact with him.

“He wanted to know if it was Republicans out there.

“We get in the car, leave, and then we find out he shoots up a bunch of people.

“If you do not have the Capitol Police there, you probably would have a dozen people assassinated.

“Look, if you obstruct a proceeding, all about holding people accountable. If you’re rioting, hold them accountable.

“But let’s just be clear here: When they try to act like this is something akin to the September 11 attacks, that is an insult to the people that were going into those buildings,” he said.

“Certain dates echo throughout history, including dates that instantly remind all who have lived through them where they were and what they were doing when our democracy came under assault.

“Will Jan. 6 be remembered as a moment that accelerated the unraveling of the oldest, greatest democracy in the world? Or a moment when we decided to secure and strengthen our democracy for generations to come?

Florida @GovRonDeSantis was asked about the one-year anniversary of the Jan. 6 attack on the U.S. Capitol on West Palm Beach this morning. This is what he said: pic.twitter.com/2AkmJkQbTE

Left-Wing Terrorists Bombed The Senate...In 2001 Clinton Let Them Out Of Prison — At Nadler’s Request