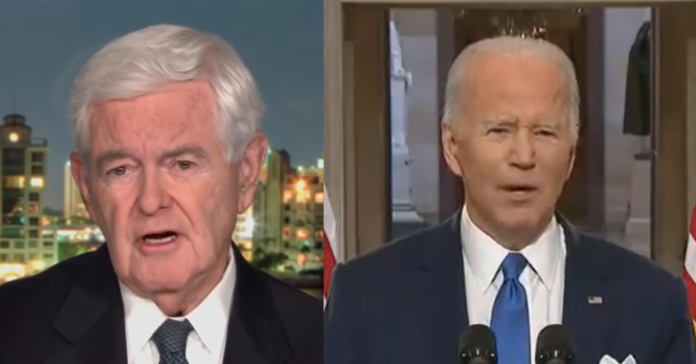 Former Speaker of the House Newt Gingrich warned the Democrats their focus on Jan 6 will backfire because people are dealing with the problems in their lives and ‘every visit to the gas station hurts Democrats.’

Newt wrote: “Speaker Nancy Pelosi and the House Democrats seem happy with their totally partisan Select Committee on Jan. 6. They will have activities this week including speeches by President Joe Biden and Vice President Kamala Harris at the Capitol.

Let me be clear: Those who broke into the Capitol, attacked police, and threatened members of Congress last year should be tried and brought strictly to justice. Further, Congress should seriously investigate what happened and how we can prevent it from ever happening again. But that’s not what is happening on Capitol Hill this week.

In the world of Big Government Socialist Democrats (nearly every elected Democrat in Washington) the riot last Jan. 6 is their best weapon to smear Republicans as unpatriotic. Just as the Russian Dossier, the Ukrainian phone call, and virtually every act of political theatre to defame Republicans has failed, this, too, will soon become an absurdity.

The reasons are simple.

First, Americans are worried about everyday life. As the Democrats are myopically stuck on partisan bickering, Americans see them actively not solving problems.

Every school that is closed by Teachers’ Unions, despite evidence that distance learning hurts children – especially the poor and minorities – also hurts union-owned Democrat candidates.

Every report of people illegally flooding into the country with no COVID-19 testing or serious scrutiny hurts Democrats. (And when Americans learns more than a million of these people have been secretly sent around the country, they will get angrier).

Every day that crime goes up, people are murdered, women are raped, carjackings multiply, and gangs openly steal from stores without consequences, it hurts the Democrats.

Every visit to the gas station hurts the Democrats.

When COVID-19 tests and medicine for therapies are not available after a year of total Democratic control in Washington, Democrats are the ones to blame.

When the number of cargo ships waiting outside Long Beach climbs to more than 120, and supply chains are halted across the country, the Democrats begin to be the party of incompetence.

Second, clumsily rehashing the events of Jan. 6 is a double-edged sword. Serious unanswered questions about who was doing and saying what could embarrass Democrat allies and make them co-conspirators in accepting risks at the Capitol.

For starters, as a former Speaker, I know well that it is the Speaker’s responsibility to oversee the protection and defense of the Capitol. It is clear that Speaker Pelosi failed to do so – and it’s going to be deeply uncomfortable for Democrats to talk about that,” he wrote.

Another false narrative about January 6 just went up in flames