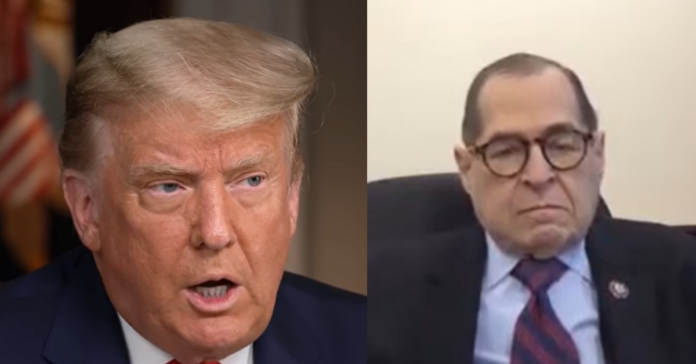 Some notable congressional Democrats are admitting they do not have faith that President Joe Biden can defeat Former President Donald Trump again and are exploring ways to use the 14th Amendment to bar Trump from ever holding federal office again.

“If anything, the idea has waxed and waned,” said Laurence Tribe, a constitutional expert at Harvard Law School. “I hear it being raised with considerable frequency these days both by media commentators and by members of Congress and their staffs, some of whom have sought my advice on how to implement Section 3.”

“I continue to explore all legal paths to ensure that the people who tried to subvert our democracy are not in charge of it,” Wasserman Schultz said.

Section 3 of the amendment, enacted in 1868, prevents any government official who “engaged in insurrection or rebellion” against the US from holding office again.

And there it is… This is what it’s always been about folks. https://t.co/6J4wehKcgv

“The point is that the constitutional purpose is clear, to keep people exactly like Donald Trump and other traitors to the union from holding public office,” Raskin said last February.

They are not the only people pursuing this dead end. From The Hill:

One pro-democracy group, Free Speech For People, has mounted a pressure campaign on top state elections officials to apply the 14th Amendment to Trump should he run again. Doing so would effectively bar Trump’s name from appearing on their state’s ballot in 2024.

This summer, the group sent letters to chief election officials for all 50 states and Washington, D.C., making the case that they have a constitutional duty to bar Trump from appearing on future state ballots.

The group argues the provision doesn’t require additional steps by Congress because the 14th Amendment is already operative by itself.

“Just as states are permitted (if not required) to exclude from the presidential ballot a candidate who is not a natural born citizen, who is underage, or who has previously been elected twice as president, so too states should exclude from the ballot a candidate, such as Mr. Trump, who previously swore to support the Constitution, but then engaged in insurrection,” their letter to Georgia’s top election official argues.

And if the elections officials don’t comply?

“We intend to litigate this question,” John Bonifaz, the group’s president, told The Hill.

“So if a secretary of state does not follow the mandate of Section 3, the 14th Amendment, we will bring this matter in court.”

The Dems and Their Media Allies Have a Dirty Trick to Win 2022 Midterms: Disqualify Republicans for 'Insurrection'