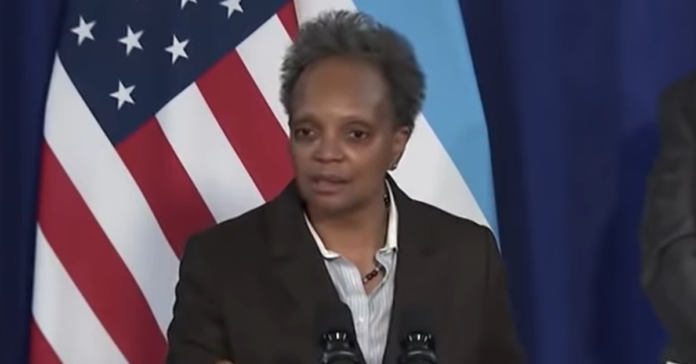 Chicago Mayor Lori Lightfoot admitted the awful truth that under her failed administration the city has become a national joke. Lori was addressing the newest tragedy unfolding in Chicago, the teachers union defied her and closed the schools, when she came clean.

Lori has lost control of the city. She lost the cops and ended up feuding with the department as the city fell into chaos. Now she is feuding with the teachers union and she is failing the kids.

Lori said: “There are so many things we could partner on. Instead, they chose an illegal, unilateral action that throws the whole system into chaos and makes us a laughingstock all across the country. I will not allow them to take our children hostage.

“Anybody who believes this teachers union is merely a union hasn’t been paying attention.

“They believe themselves to be a political movement or political party and that is the lens through which we have to view every one of their actions.

“Anybody sitting in this seat, given who the CTU is, would be in the same place that I am.

“This isn’t about personality. This is about ego”

“We will not pay you to abandon your posts, and your children at a time when they and their families need us most,” she warned.

“It will not happen on my watch,” she said.

“Lightfoot’s administration has been an enemy to public education here in Chicago,” CTU Vice President Stacy Davis Gates fired back.

“I don’t think CTU will give Lightfoot an inch even if she gave them everything they wanted,” Chicago Alderman Raymond Lopez.

“They are on a mission to be obstructionists to this administration in a way that puts me to shame. I can recognize when she does something right, and they refuse to do even that.”

As a standoff continues between Chicago Public Schools and teachers over COVID safety protocols, Mayor Lori Lightfoot announced that the city has filed an unfair labor practices complaint over a union vote to switch to remote learning.

The mayor made the announcement during a press conference Wednesday, saying that while the city would prefer to reach an agreement with teachers to get them back into classrooms, that they are considering all options.

Another false narrative about January 6 just went up in flames