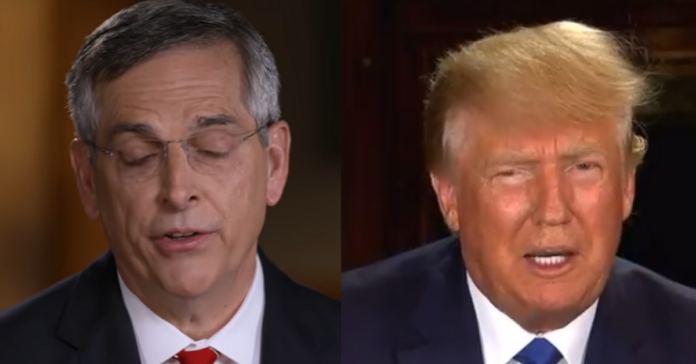 Georgia law prohibits third parties from picking up and delivering ballots on behalf of voters a tactic called ballot “harvesting” Raffensperger said, “We do have some information. And we are going to investigate that. We did deploy drop boxes that were under 24/7 surveillance, and because they were then that really, you know, can indicate who dropped that information off, and we’re really just going through that.

“If people give us, you know, credible allegations, we want to make sure that we do that. And we have that right now as an ongoing investigation.”

“That will be one of the processes we’re looking at if we have people that don’t want to come forward for whatever concern because we really need to get to the bottom of it,” he said of the possibility of issuing subpoenas.

“We just can’t let it sit there and lie. So if it comes to that, then that’s probably the next step that we’d be looking at,” he added.

He said of the new election law in Georgia: “For the first time, if we have a county that continuously fails like we do in Georgia, it’s called Fulton County, that we have accountability measure that we can come in.

“And if they don’t improve, then you can actually replace that county election board.

“And then they’ll hire a new election director to fix the process,” he said.

From Just The News:

The announcement of the harvesting probe comes nearly a year after Raffensperger rebuffed Trump’s claims of widespread fraud in the November election and declared on “60 Minutes” that Georgia had a mostly secure and fair election.

Many of the headline-grabbing allegations made by Trump advocates in Georgia in the frenzied days after the November election have been dismissed after investigations.

For instance, claims were made that thousands of dead voters cast ballots, but a final tally found only four ballots statewide were cast in the names of deceased.

Also, video footage surfaced that led some to claim suitcases of fake ballots were pulled out from under a table in the Atlanta vote-counting center. In fact, the ballots were lawful absentee ballots cast by real voters.

Raffensperger’s office, however, has admitted that vote-counting in the state’s largest county of Fulton, where Atlanta is located, suffered from widespread mismanagement and irregularities in 2020 — and for many years earlier — though the problems were not widespread enough to overcome Biden’s 12,000-vote margin of victory.

While Stacey Abrams and her allies spread misinformation about Georgia’s new election law, I will continue to fight for the security of our elections.https://t.co/Jr0KsJAvWe

For over a YEAR, Georgians begged Brad Raffensperger to investigate the 2020 election. Instead, he has tried to undermine them. Don’t let Brad take ANY credit for the hard work put in by private citizens and organizations to preserve election integrity. https://t.co/Hh079ZHZlE

New Info Emerges About Mastermind of Whitmer Kidnapping Plot, Calling Everything Into Question