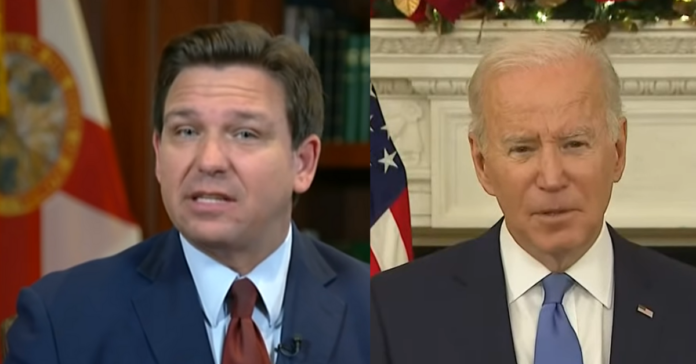 Gov. Ron DeSantis turned the tables on President Joe Biden and the Dems who bashed Trump and the GOP’s response to the virus relentlessly and still do to this day. The Dems blamed Trump and the GOP for everything but mainly for not having the required testing capacity.

This was a central theme of Biden’s campaign, that he could do better. especially with testing. So after taking incoming from all sorts of characters on the left who claimed DeSantis was missing (he was with his wife getting cancer treatment), Ron finally fired back.

“She’s there for a long time,” DeSantis said of hs wife. “I mean I’m there most of the time, but it’s a draining thing.

“When she’s done with it, it’s not something that’s great to see.

“And so I just think a lot of people, particularly people that have gone through breast cancer treatments, the notion that that would be considered a vacation is offensive to a lot of those folks.

“When you’re in a political arena, sometimes you’re fortunate in the enemies that you have because, you know, these are folks that are just not shooting straight right now,” he said of Dem criticism.

Ladapo said he wouldn’t “restrict access to testing” but considering Biden’s can’t deliver the requited tests he wants to “unwind the testing psychology that our federal leadership has managed to unfortunately get most of the country in over the last two years.”

“We need to unwind this testing, planning and living one’s life around testing,” he said.

“Without it, we’re going to be stuck in this same cycle. It’s time for people to be living.”

Tonight, I was honored to receive the Defender of Freedom award at “Let Us Worship” in Miami.

In Florida, we will protect the right to worship and won’t let anyone shut you down. pic.twitter.com/8f8HZR7D3X