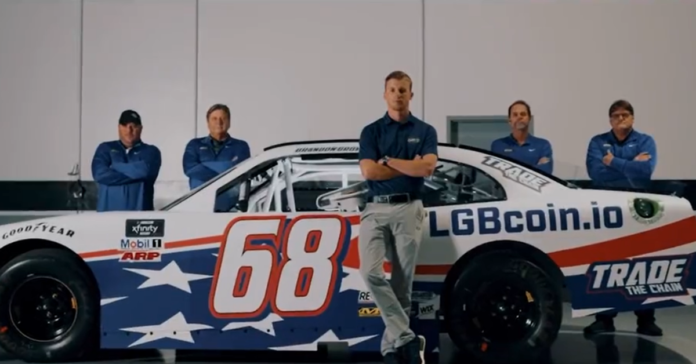 Brown’s spokesperson Maxwell Marcucci said: “After the announcement went live on Thursday morning, NASCAR acknowledged to us late that afternoon that we had received approval but that they now needed to discuss this at a higher level.”

According to Marcucci, Brandonbilt Motorsports received approval from a NASCAR Racing Operations official on Dec. 26 for the sponsorship.

“We are thrilled to partner with Brandonbilt Motorsports and Brandon Brown for the 2022 NASCAR Xfinity Series season,” said James Koutoulas, LGBcoin HODLer and founder of Typhoon Capital Management when the deal was announced.

I’m excited to welcome @LGBcoin_io aboard my No. 68 Chevrolet Camaro as our 2022 NASCAR Xfinity Series full season primary partner!

“Brandon is not only an incredibly talented driver but also a thoughtful individual wise beyond his years. His commitment and singular focus on his profession is inspiring and his personal story is one that we can all be proud of—an American story of success and perseverance. Brandon is truly America’s Driver.”

“We are proud to support Brandon this season, to help him continue his American dream,” added Koutoulas.

“Having the financial support of LGBcoin is incredible, especially at such a pivotal time in our team’s growth as we work to build to the next level of competition,”  Brown said before the reversal.

“From wondering if we would have the financial means to continue to compete, to my first major win (at Talladega no less), to becoming an unintentional meme, this past season was a rollercoaster. The support of sponsors like LGBcoin empowers us to be as competitive as possible and I’m looking forward to competing hard on the track in 2022.”

Brandonbilt Motorsports issued a statement after signing the deal that said:

The partnership marks the latest crypto outfit to back a NASCAR driver and team, a growing trend not only in motorsports but across all professional sports leagues. In 2022, BMS driver Brandon Brown will sport an eye-catching red, white, and blue livery with the logo and wordmark of LGBcoin aboard his No. 68 Chevrolet Camaro for all 33 races of the NXS season.

After securing funding from a portfolio of crypto related entities during the 2021 NXS season, Brown becomes the first NASCAR driver to land multiple crypto deals and distinguishes himself as an early attractor for meme and crypto partnerships.

LGBcoin will make its racing debut aboard Brown’s No. 68 Chevrolet Camaro during the NASCAR Xfinity Series season opener at Daytona International Speedway on Saturday, February 19, 2022.