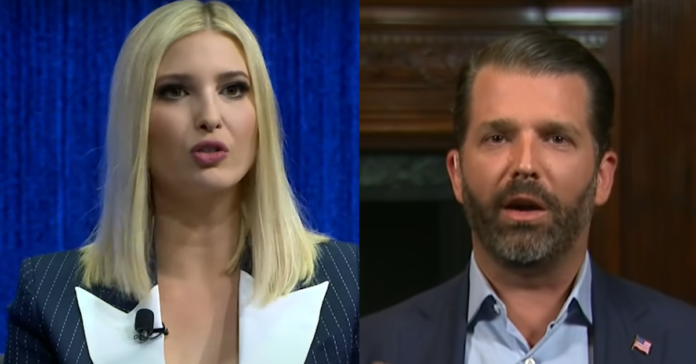 Former President Trump’s eldest son and daughter told New York Attorney General Letitia James to go pound sand and will not comply with her subpoenas. The New York State attorney general’s office is conducting a civil investigation into the way the Trump organization valued its holdings.

The Trump’s, like every other developer in New York, gets multiple appraisals of its properties to try to reduce their tax burden. If James had something she would have charged Trump by now. But she has nothing so she is trying to squeeze the Trump’s and must be hoping to get a perjury charge or make some other desperate move.

“A dispute has arisen between the OAG and the Individual Trump Parties regarding the Subpoenas,” a document filed Monday by the AG’s office said.

The document went on to say that Donald Trump Jr. and Ivanka Trump will be named as respondents in James’ inquiry because they will not comply.

The subpoenas from the office of Attorney General Letitia James were disclosed in a Monday filing with a New York state court in Manhattan.

James has also subpoenaed Trump. Lawyers for the Trump family are seeking to block her from questioning the former Republican president and his children, the filing said.

Lawyers for the family were not immediately available for comment.

The subpoenas were first reported by the New York Times, which cited a person familiar with the matter.

Last month, Trump sued James to block her civil probe into the Trump Organization, accusing the Democrat of partisan politics.

James, a Democrat, has spent more than two years looking at whether the Trump Organization misled banks or tax officials about the value of assets — inflating them to gain favorable loan terms or minimizing them to reap tax savings.

James’ investigators last year interviewed one of Trump’s sons, Trump Organization executive Eric Trump, as part of the probe. James’ office went to court to enforce a subpoena on the younger Trump and a judge forced him to testify after his lawyers abruptly canceled a previously scheduled deposition.

Although the civil investigation is separate from a criminal investigation being run by the Manhattan district attorney’s office, James’ office has been involved in both.

Ivanka Trump and Donald Trump Jr. have been subpoenaed by the New York attorney general as part of the probe into whether the Trump real-estate business manipulated the value of key assets https://t.co/0BCVZbqxHQ