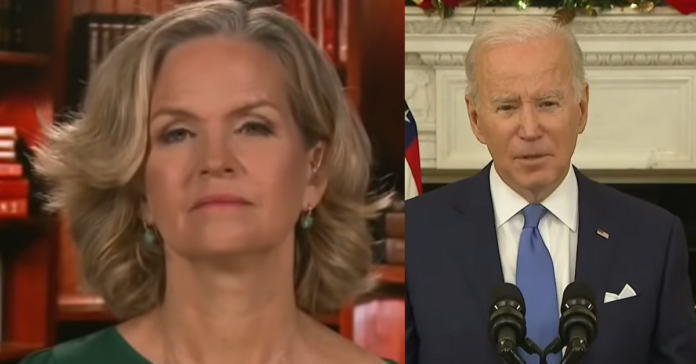 Democratic Nassau County (N.Y.) Executive Laura Curran lost her seat in the mini red wave that swept across America in November of 2021. The GOP swept in Virginia, almost pulled off a shocker in New Jersey, and surprised other Dems like Curran.

Curran went on Fox News’ “Watters’ World” Saturday to issue a warning to her party about Joe Biden as the Dems face what she calls a ‘bloodbath’ in 2022. She was asked if she blamed her surprising loss on Washington DC and she said yes before she trashed Biden.

Curran said: “Unfortunately, my party, the Democratic Party, just conveys weakness right now. It almost feels like elder abuse with what’s going on with President Biden. He has a hard time putting a sentence together.

“I think everyone gets nervous listening to him talk, he’s going to mess up. What we need always, and especially now, is someone who exudes confidence and competence.

“Someone who sets a reassuring tone.

“And we’re not getting that at the top right now, and unfortunately, I think your previous guest, Karl Rove, is absolutely right.

“I think it’s going to be a bloodbath for the Democrats in the midterms.

“As a Democrat, I think it’s really important to have a strong, two-party system.  I think it’s good for democracy.

“I don’t think it should be one-party rule either way, but unfortunately it seems like we’re giving the Republicans ammunition just to shoot us because we exude this weakness.

“That’s what people are expecting. Unfortunately, my party is not delivering this right now,” she said.

It has been the honor of a lifetime to serve as your County Executive.

I will always be proud of all that we accomplished together these past four years.

From the bottom of my heart – Thank you.