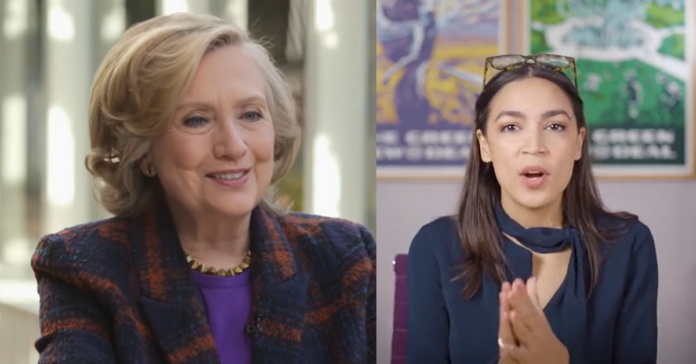 Morris said: “I’ve always said that the way you could tell if Hillary is running again is check whether she has a pulse or not — and if she does, most likely she’s running.

“But lately, there have been very significant signs that indicate that she is, in fact, planning to run. She gave an interview earlier this week with MSNBC where she talked about, quote, ‘We have to think clearly and be clear-eyed about what it will take to win the House and the Senate. And she then proceeded to basically blame Rep. Alexandria Ocasio-Cortez and the progressives for policies that she said could endanger the Democratic majorities.

“It’s kind of hard to see candidates during the blame game for an election that hasn’t happened yet.

“She was, and then, interestingly, the reply came from AOC, who said we need to enact the Build Back Better program, and then unless we do, so we’re going to lose the midterm elections.

“So you have dueling views from the center, and the left about what’s going to happen.

“What’s going to cause the collapse of the party, even though it hasn’t happened yet.

“I think that’s presaging a campaign. I think Hillary’s message will be after the wipeout that will happen next year.

“They’re going to blame each other, and AOC will use that to challenge the leadership and say she should run.

“And I think that Hillary is going to use that — to say that we need to sane, more moderate approach in order to win.

“And I think it will set up a conflict between Hillary and AOC for the democratic nomination. There will be two other candidates.

“The blacks will have one, probably Cory Booker, and the establishment, probably Pete Buttigieg, and I see a four-way race coming,” he said.

“How do you know if Hillary is gearing up for another presidential bid?

“Her weather vane begins to twirl and points to the most advantageous direction for a candidacy. Following her ruminations and political gyrations is as accurate as monitoring polling data.

“Lately, America’s disgust with the woke progressives is registering with her, and she gives evidence of tacking to the center. It is triangulation all over again. She told MSNBC’s Willie Geist that Democrats needed to do “some careful thinking about what wins elections, and not just in deep blue districts where a Democrat, and a liberal Democrat or so-called progressive Democrat, is going to win.”

“Saying that people want a Congress that can “get things done,” she took a swipe at the woke Democrats saying the party needed to be “clear-eyed” about how to win the congressional elections of 2022.

“We’ve got to be very clear-eyed about what it’s going to take to hold the House and the Senate in 2022,” she said.

“Republicans are doing everything they can to create an environment in which winning the Electoral College, even narrowly the way Joe Biden did, will be out of reach for Democrats.”

“So, the blame game for the likely coming wipeout of the Democrats has started,” he wrote.

Dick Morris: “Lately, America’s disgust with the woke progressives is registering with [Hillary Clinton], and she gives evidence of tacking to the center. It is triangulation all over again.”https://t.co/UU46zTfmz7

Marjorie Taylor Greene Fires Back After Getting Suspended From Twitter: “When Maxine Waters can go to the streets and threaten violence on Twitter”