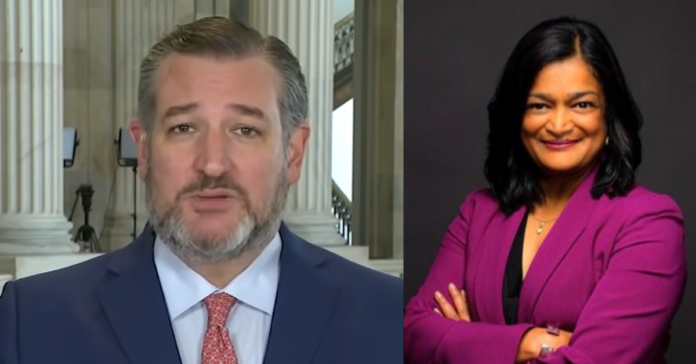 Texas Senator Ted Cruz fired back Democrat Rep Pramila Jayapal on social media after The liberal Dem went after one of Ted’s constituents. Elon Musk recently moved to Texas to get away from failed Dem policies in California and the left has been after him ever since.

Musk just paid more taxes than any American in history but the left is not happy. They want to tax him on unrealized paper gains too. Ted Cruz and the GOP won’t let them, but if the progressive left ever did tax unrealized gains they would be killing the golden goose. That is what is at stake.

Jayapal said: “Elon Musk made $36 BILLION in one day, but wants to brag about paying an $11 billion tax bill. Oh yeah, he also added more than $270 BILLION in wealth just since the pandemic started. Time for the rich to pay their fair share.”

“Got it. You don’t like @elonmus. Who else do you want to loot?” Ted Cruz fired back.

Liz Warren said to Joy Reid: “But you know the part that makes me angry about this? It’s on behalf of every public schoolteacher, every waitress, every computer programmer, every street cleaner who actually paid taxes and that means they paid more than Elon Musk did in federal income taxes.

“And that’s just not right. And it means the system is broken. But the days when these guys not only get to rake it all in but then rub everybody else’s nose in it while they head off in outer space.

“And declare how they did this all on their own when they were subsidized by the federal government and subsidized by every waitress and public schoolteacher who paid their taxes.

“This is wrong. And Elon Musk needs to eat a big dish of that,” Warren added.

“For so many reasons- being a freeloader – and a selfish and disrespectful one – and for misappropriating Black vernacular for misogynistic purposes, Elon Musk is the absolute worst.”

“If you opened your eyes for 2 seconds, you would realize I will pay more taxes than any American in history this year.”

Elon linked to a tweet about Joy Reid’s fake hacking scandal that allowed her to keep her job with the caption:

“Has the FBI found the people responsible for hacking Joy Reid’s old blog yet? Total hoax yet she’s never paid a price for it.”

“(Lack of) Joy Reid is a lobbyist for Sen Karen,” Musk added.

He also said: You remind me of when I was a kid and my friend’s angry Mom would just randomly yell at everyone for no reason. Please don’t call the manager on me, Senator Karen.”

(Lack of) Joy Reid is a lobbyist for Sen Karen

Dr. Fauci Says He Has A Prediction When Omicron Will Peak In the United States!