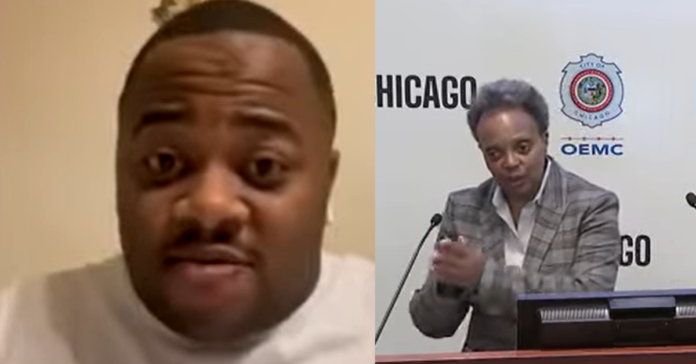 A 911 dispatcher from the city of Chicago dropped a dime on Mayor Lori Lightfoot saying she is failing the city and allowing crime to get out of control.

Keith Thornton Jr. posted a video on social media on Christmas Eve where he accused the mayor and Superintendent of Police David Brown of not doing their jobs as the city burns.

He said: “I’m hot about it because this mayor does not care about Chicago police officers, period. She doesn’t care about any first responders. She does not care about the d*** city. It doesn’t matter if you’re white, black, Asian, Hispanic, other, straight, gay, Democrat, or Republican. She don’t even care about her city workers. All that lady cares about is her f***ing self.”

“And I pray you’re watching this because you’re a disgrace and I’m tired of it,’ he said to Lightfoot. “And your city is tired of it. Matter of fact, it’s not your city. The city of Chicago is tired of it,” he said.

“A shooting came up a few days ago and we couldn’t even get a unit over there. A unit could not even get to that scene until 10 plus minutes later because there was no one,” Thornton said.

“And I know you don’t like me, and that’s OK, because I love you,” he said “but I’m tired of you because you’re an absolute disgrace to everyone within the city.”

He said that the “city is burning” and that it was time for the people to “stand up” and “do something.”

“We’ve got to come together for our area because this is bull s***,” he said.

Thornton, who grew up in Chicago, has worked as a police dispatcher since April 2018, according to his LinkedIn profile.

Prior to the CPD he worked for the Los Angeles Police Department and in medical services in California and the Philippines.

The most recent Chicago police department data, from the week of December 13-19, shows murders 50 percent up year-on-year.

The Numbers Are Officially In, And Many Think Something Fishy is Going on Delaware