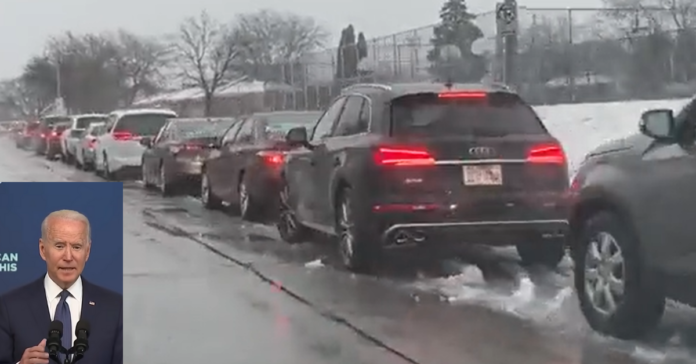 President Joe Biden and Vice President Kamala Harris were relentless in their criticism of how Trump and his administration handled the pandemic. It was a central theme of their campaign, that he could do better than Trump on this key issue.

Biden has had a series of fiascos since being inaugurated. His poll numbers started sliding after the debacle in Kabul and have not stopped. So Biden can’t afford a setback on his key issue, it would be fatal for his reelection prospects. But he bungled testing anyway.

Now as the nation is facing another wave of the virus see wait times for testing that are not much better than in March 2020. The lines of cars stretching for blocks to get tested are also looking like they did in March 2020. But Biden had two years to observe the virus and one year to get it under control. This is a failure that will doom Biden and Kamala because not even the media can spin this.

And worse for Biden and Harris, the media is not even trying to instead they are calling out Biden’s incompetence. (see what CNN said below)

Rich Lowry said: “This is *exactly* what Biden ran against. A line from his Covid plan attacking “the Trump fiasco”:

“In Arizona, this past week, Americans with COVID-19 have had to wait in baking hot cars in miles-long lines for a test, and those were the lucky ones.”

Here’s the line of cars waiting for free #COVID19 tests on Mill Rd in Milwaukee. And no- I didn’t drive that fast. It’s sped up 4x. pic.twitter.com/qN2ZLkLjJR

Politico’s Tara Palmeri said: “Biden “ran on the promise” that he would increase testing and shut down the virus, “but that just hasn’t happened.”

“He didn’t just say it a few times on the campaign trail. For the past year, he said it over a dozen times.”

“You could argue that we should have known a year ago, six months ago, two months ago, a month ago” before saying he wished he had thought of ordering 500 million at-home tests “two months ago.”

Even CNN knows Biden is doomed. From CNN:

The frustrating search for tests endured by many Americans may also have a political consequence for Biden as he searches for a bounce back after a grim few months that saw his approval ratings tumble. He is, after all, on the record promising to fix a dearth of testing that has been laid bare by the recent viral surge.

Running on competence, he put the issue at the center of his 2020 campaign, which was partly rooted in highlighting ex-President Donald Trump’s failures during the first year of the pandemic. And in an address to the nation last March, for instance, the President said: “We continue to work on making at-home testing available.”

More than nine months later, he is now admitting not enough has been done. Such comments make it hard to accept arguments that the White House was taken off guard by the Omicron variant. Many experts have said for months that rapid testing needs to be more available to the public.

It’s hardly a secret that new variants of the virus were inevitable. And a recent episode in which White House press secretary Jen Psaki mocked the idea of sending a test to all Americans — a goal Biden has now embraced — further muddled the administration’s stance on this new phase of the pandemic.

…”It really is shameful that we don’t have the amount of tests that are necessary to be able to use it as the robust containment tool that we know it is when used effectively,” Dr. Chris Pernell, a public health physician and fellow of the American College of Preventive Medicine, told CNN’s Alisyn Camerota on Monday.

Politico’s Tara Palmeri: Biden “ran on the promise” that he would increase testing and shut down the virus, “but that just hasn’t happened.”

“He didn’t just say it a few times on the campaign trail. For the past year, he said it over a dozen times.” pic.twitter.com/GFinz8IKlT