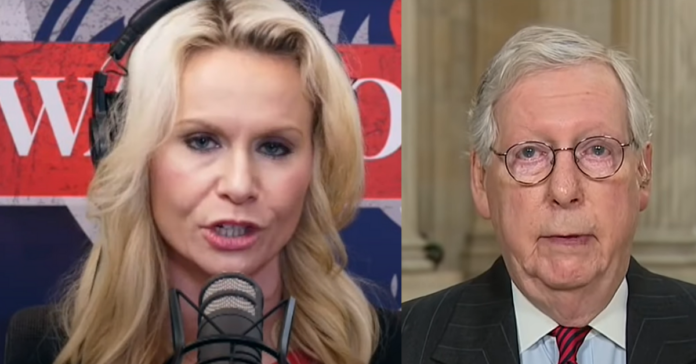 A Republican Senate candidate just dealt a blow to Senate Minority Leader Mitch McConnell saying she will not support Mitch as party leader in the upper chamber.

Kelly Tshibaka is a Trump backed-candidate challenging Sen. Lisa Murkowski in Alaska. Kelly said earlier this month that McConnell caved too easily to the Dems and was too willing to make deals with the Biden administration.

But now she is making it official and going on record saying that if she wins the primary, the GOP candidate is all but guaranteed to win the general, she will vote to send Mitch packing from his post as leader of the GOP in the Senate.

“On December 30, 2010, Alaska state officials certified Lisa Murkowski as the winner of the election, making her only the second U.S. Senate candidate since the passage of the Seventeenth Amendment to win election via write-in and defeat candidates with ballot access, after Strom Thurmond in 1954.”

Reuters said at the time, “A member of one of the state’s most powerful political families and a senator since 2002, Murkowski had to campaign to get voters to write her name on the ballot after Miller, backed by former Alaska Governor Sarah Palin, defeated her in Alaska’s Republican primary in August.”

“Mitch McConnell has repeatedly bailed out Joe Biden, giving him gifts of Senate votes, which are the only things keeping the Biden administration on life support.

“As an example, after rescuing Biden with the last debt ceiling increase, McConnell said he would never do it again.

“But he just did, and he had Lisa Murkowski’s help in doing so.

“The actions of McConnell and Murkowski on the debt ceiling show that it’s the political elites pitted against real Americans.

“When I defeat Murkowski and become Alaska’s next U.S. Senator, I will not support Mitch McConnell as leader. It’s time for new, America First leadership in the Senate.”

When I’m your Senator, I will ALWAYS stand up for our active-duty military and our veterans. They were heroes at war, and now they’re heroes at home. Together, we can fight to improve and save their lives, just like they did for us. pic.twitter.com/FTjE8kupzO