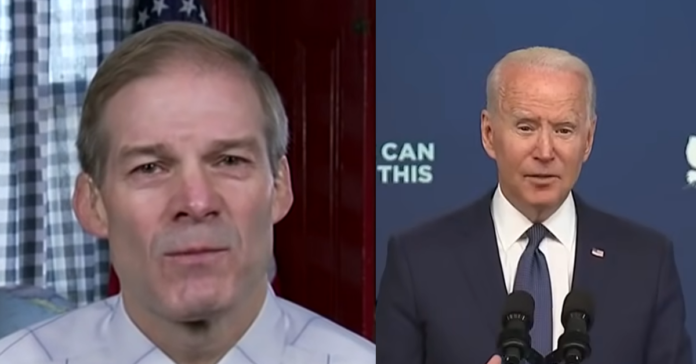 Jordan said the GOP will “do the oversight that needs to be done” and that the current leadership in Congress won’t do.

Jordan said: “The top investigation, which I think will primarily be done on the Oversight Committee, is on Fauci and the gain of function and the lab leak, which is the most likely scenario how we got this virus.

“That’s kind of oversight you’re supposed to do, not this crazy January 6 political attack that they’re doing.

“If the Democrats go down this road of kicking Republicans off committees, trying to put a good man in prison, like Mark Meadows, they shouldn’t do this stuff, but if they’re going to, if they’re going to cross this bridge, if it’s good enough for one side, it should apply to the other as well. Jordan added.

“We should be looking at what the Justice Department really did do, the information that was passed back and forth when they decided to go after moms and dads in this whole school board issue”

Jordan also warned Biden to expect investigations into the “debacle” on the U.S.-Mexico border.

“On the House side, if you do get a Speaker Jim Jordan, a Speaker Marjorie Taylor Greene, let’s be fanciful here, a Speaker Madison Cawthorn—it is not going to happen.

“But if the House, if Republicans take over the House all hell’s going to break loose and they could file articles of impeachment against the president and the vice president”

“I mean, all hell will break loose, nothing will get done,” said Renee Graham of The Boston Globe.

“This will be a vengeance fantasy that Quentin Tarantino could not have dreamt of. It is going to be payback time.”

Rep. @Jim_Jordan lays out all the investigations Republicans plan to take up if they win the House of Representatives. The #1 priority? “Fauci and the gain-of-function and the lab leak.” https://t.co/ErcW4QJoz6

Police Officer Who Shared His Lunch With Homeless Mother, Dismissed For Not Taking Vaccine