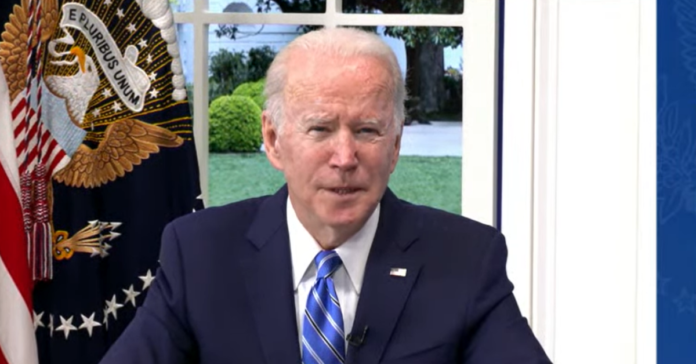 President Joe Biden came clean about his failures on COVID testing and other areas critical to dealing with the virus before passing the buck to states telling governors there is no federal solution for the virus. If you recall, Biden and the Dems constantly trashed Trump’s state-centered response to the virus.

A shameless flip flop from Joe Biden, one the media surely will ignore but the people will remember. Biden’s polls are bad because people believe he is doing a bad job. And not just red-state Republicans, but people who can’t get a virus test in new York City are fuming as well.

Biden, speaking on a call with the nation’s governors, said: “Look, there is no federal solution. This gets solved at the state level.

“And then ultimately gets down to where the rubber meets the road, and that’s where the patient is in need of help or preventing the need for help.

“If you need something, say something.

“The bottom line is I want to assure the American people that we’re prepared.

“We know what it takes, and as this group of bipartisan governors shown, we’re gonna get through by working together.”

BIDEN, TODAY: “There is no federal solution” to COVID.

According to a bombshell report from Vanity Fair, Biden’s team did not go forward with a plan to ramp up home testing before the holidays.

The plan, in effect, was a blueprint for how to avoid what is happening at this very moment—endless lines of desperate Americans clamoring for tests in order to safeguard holiday gatherings, just as COVID-19 is exploding again.

But the proposal shared at the meeting in October, disclosed here for the first time, included a “Bold Plan for Impact” and a provision for “Every American Household to Receive Free Rapid Tests for the Holidays/New Year.”

Three days after the meeting, on October 25, the COVID-19 testing experts—who hailed from the Harvard T.H. Chan School of Public Health, the Rockefeller Foundation, the COVID Collaborative, and several other organizations—received a back channel communication from a White House official.

Their big, bold idea for free home tests for all Americans to avoid a holiday surge, they were told, was dead.

That day, the administration instead announced an initiative to move rapid home tests more swiftly through the FDA’s regulatory approval process.

“There is no federal solution. This gets solved at the state level.”

President Joe Biden promised to help states combat COVID-19 with the full support of the federal government while speaking to governors Monday. “If you need something, say something,” Biden said. pic.twitter.com/jbuMNaPngT