I don’t know why the Handlers keep trotting this buffoon out in public. It never ends well. He never has a “clean” interview, where he sounds strong, confident, and in command.

And whether or not the Handlers want to admit it, watching Biden bumble and fumble around is a huge reason why his poll numbers are in the toilet. The American people are not living in a smug bubble, we can clearly see what’s going on, even if the mainstream media refuses to tell us. And actually, in this case, the fact the media says NOTHING about Biden’s mental issues, makes them even more obvious.

Look, the man can’t speak. Joe doesn’t know what he’s talking about half the time, and in his recent ABC interview, he couldn’t even keep common things straight.

In a disastrous blunder, Biden was confusing test kits with “pills,” during the interview, and he did it TWICE… and to make matters worse, the second time he made the mistake, he didn’t even know enough to correct himself.

And if that wasn’t bad enough, he was also screwing up the numbers.

This type of behavior does not inspire confidence in the American people.

Joe Biden, the so-called “president” of the United States, looks and sounds like a man who should live in a memory care facility, not the White House.

This clip is a complete and total disaster.

Biden: "500 million pills, I mean excuse me, 500 million test kits…I wish I had thought about ordering a half a billion pills two months ago"(again, he means test kits)pic.twitter.com/zFIr0cidFi

And then there’s this clip…

And the guy who promised to “shut down the virus,” is now claiming he doesn’t know if he can do it.

Joe Biden — who promised to "shut down the virus — now says "we don't know" if we're going to "overcome" COVID. pic.twitter.com/iPVPjGT0wJ

Reminder of the BS story Joe’s Handlers told the American people during the campaign: 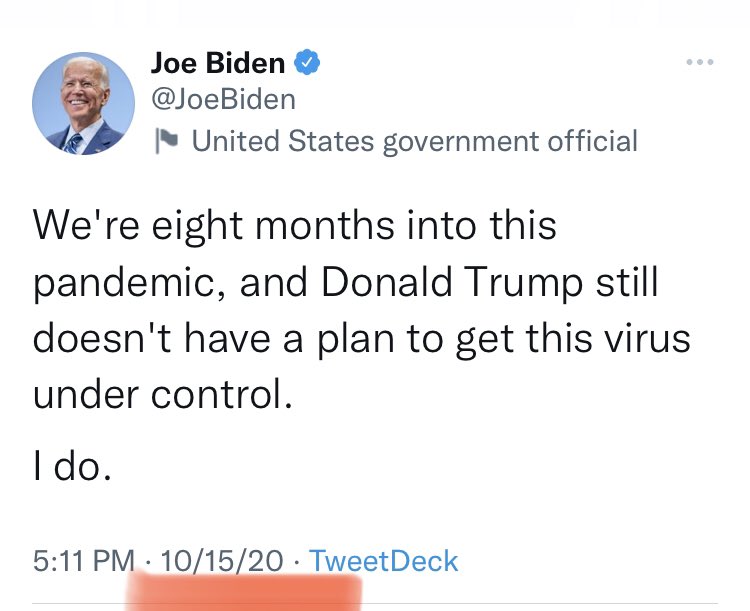 “They must send an electronic zap to his head every time he corrects himself.”

“”It’s not a failure to not have test kits available in the dead of winter right before Christmas during the emergence of a new Covid variant, but in hindsight I wish I would have thought of that.” 81 million votes my ass. He should resign immediately.”

“What a confused old man. This is just sad.”

“Bumbling stumbling fool. Doc Biden is a monster for letting her husband attempt this job.”

“What an embarrassment he is”

“Experts say Joe Biden’s behavior suggest he may have the “OLDMORON” variant!”

“He doesn’t have any brain capacity left.”

“Well damn did he poop his diaper again that he has to sit so far away lol …. Biden has reached full memory capacity, you can’t talk to him after a certain time”

“and Biden thinks COVID ‘hit here 2 months ago” .. his brain is cabbage soup!”

“This is what happens when a prez is installed.”

No wonder COVID is a complete mess.

Same as Afghanistan, and the US border, right?

Are you seeing a pattern here?

Joe Biden is unfit to serve and so are the people “handling” him.

More than 120,000 residents left Illinois over the past year (Update)

Biden Breaks Silence On Trump Rematch, Tempts Fate: “That would increase the prospect of running, you’re trying to tempt me now?”