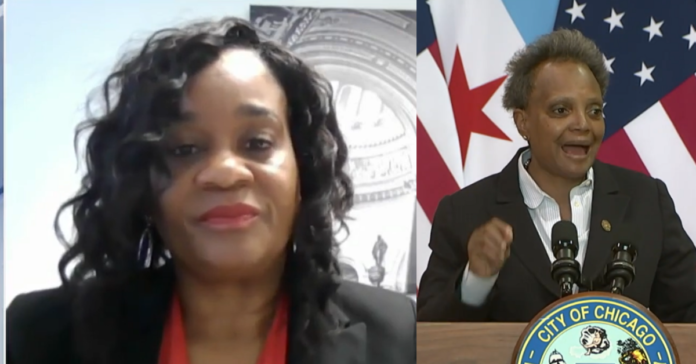 Illinois Senate Majority Leader Kimberly Lightford (D) and her husband were carjacked Tuesday evening in a close suburb of Chicago. Police said, around 9:45 p.m., three masked individuals driving a Dodge Durango carjacked Lightford as she was driving a Mercedes Benz SUV in the 2000 block of South 20th Avenue, near Fillmore Street, along with her husband.

“They made her get out of the car, took the car, took her purse – everything in the car, drove off down that way,” said Cynthia Boyd. “Told the husband to get down on the ground.”

Lightford had just dropped off a friend at Boyd and Sam Douglas’ home near the scene of the crime. “She was saying: ‘Don’t shoot my husband! Please don’t shoot my husband.” Boyd said. “They made them get out the car, and took the car, took her purse – everything that was in the car, they took all of that, and drove off down that way. Told the husband to get down on the ground or whatever.”

“She was just upset, just upset,” Douglas said. “You know, it don’t happen every day, so when it happens to you, it’s upsetting.”

“The senator she was really in a bad state – she was just really upset,” Boyd added. “She was like sort of like crying. She was really hurt by it.”

“First and foremost I am thankful that my husband and I are alive and physically unharmed. I am trying to process the trauma of what happened. I want to thank everyone who has offered their love and support. I want to especially thank Mayor Katrina Thompson and the Broadview Police Department for their quick and thorough response,” Lightford said in a statement.

Lightford is the Senate Majority Leader which makes her the second-ranking Democrat in the Illinois Senate behind Senate President Don Harmon. She was in favor of defunding the police. Chicago Mayor Lori Lightfoot, also in favor of defunding the police, came clean and finally asked the Feds for help in saving the city from these failed Dem policies.

Meanwhile, A U.S Congresswoman was carjacked at gunpoint in Philadelphia. She was also in favor of defunding the police.

Scanlan issued a statement saying she was carjacked at gunpoint near FDR Park but was not harmed.

The statement said: “The Congresswoman was physically unharmed. She thanks the Philadelphia Police Department for their swift response, and appreciates the efforts of both the Sergeant at Arms in D.C. and her local police department for coordinating with Philly PD to ensure her continued safety,” the statement read.

“Everyone deserves to feel safe in our city, and sadly, as we know, that hasn’t always been the case this year. It’s disheartening, and quite frankly infuriating, that criminals feel emboldened to commit such a reckless crime in the middle of the day in what should be a place of tranquility and peace — one of Philadelphia’s beautiful parks.

“I’m thankful that she was not physically harmed during this incident, and my thoughts are with her during what I’m sure is a traumatic time.”

CBS reporter Joe Holden said she was, “carjacked after leaving a meeting in South Philadelphia: Police say U.S. Congresswoman Mary Gay Scanlon was held up at gunpoint as two men stole her car. She was not physically harmed. Detectives, along with the FBI Philadelphia are searching for the carjackers.

Statement from the Office of Congresswoman Mary Gay Scanlon on today’s incident: pic.twitter.com/fomScnWUXo