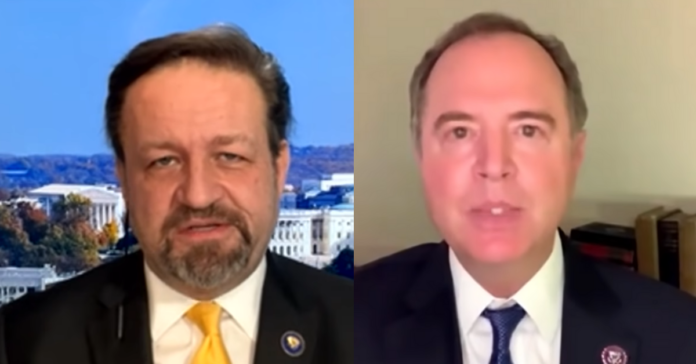 Former Deputy Assistant to the President Dr. Sebastian Gorka put Adam Schiff and Nancy Pelosi on notice after his phone records were subpoenaed from Verizon by the Jan 6 Select Committee saying ‘they’ve chosen the wrong guy’ before confirming he will “go to a political battle” with them over the incident.

Gorka said: “They’ve chosen the wrong guy — they still they probably don’t know that I still have all my clearances — and I am prepared to go to a political battle with Adam Schiff, with Nancy Pelosi, and with all of the radicalized Democrats that sadly have destroyed that party.

“I’m going to approach it as somebody who has been teaching about political warfare for almost 20 years, training the intelligence community, the FBI, members of the military Special Forces, to understand that you don’t have to fire a shot to destroy the greatest Republic on God’s green earth.

“No mention was made of any crime I’m alleged to have committed. I was supposed to give a speech that day, which I didn’t give — I didn’t know that’s a crime in America — and the fact is, for Verizon, who of course are capitulating, they’re supposed to dump everything, all the phone number details, the SIM card details, the product registration details for me and my whole family.

“I’ve done nothing wrong. But that’s not the principle. The principle is the U.S. Constitution and the Fourth Amendment and my rights to undue seizure of my property and my information.

“As a child of the Cold War, let’s be very clear. President Reagan did bankrupt the Soviet Union. But what he did that was truly the deathblow to the communist ideology of that wicked, evil empire, and what Margaret Thatcher — who I grew up on — what Saint John Paul II did, which was far more important, was to bankrupt them morally, to prove to the world that they were illegitimate.

“So when you are not afraid, when you speak truthfully, about the extremists, about the radicals, about the fascism of these individuals, about their totalitarian tendencies, that in fact is the most dangerous and that is what they are afraid of.

“This isn’t really about party politics, this isn’t about left v. right.

“This is about every American standing up to protect the U.S. Constitution. When you can take somebody’s private, personal communications and use them without due process, without a court order, without a crime being committed, as a political weapon against them, that is the death of our Constitution.

“But this is fascinating. A guy who was meant to speak at the Supreme Court the same day as the President’s speech, but who didn’t, his phone records are being subpoenaed.

“What does that tell you about the level of desperation if that’s the best they’ve got to subpoena me?

“They’re desperate because they look at the popularity figures for Biden, for Kamala, and they know they’re going to get trounced next year in the midterm.

So this is the fate of the flailing death throes of a Democrat Party that wants to destroy 74 million Americans, but has no weapon to do so,” he said.

Smartest Man In World Denounces Dems False Virtues: “Overregulation, overlitigation, overtaxation, at its heart wokeness is divisive, exclusionary, and hateful, it gives mean people a shield to be evil and cruel armored in false virtue"