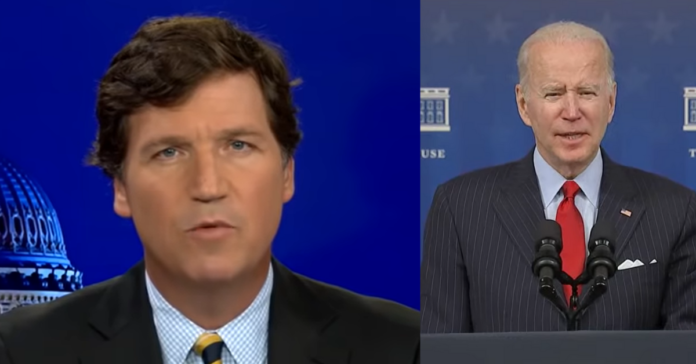 Tucker Carlson cut to the chase after a new poll showed how far the Dem politicians have fallen in the public’s eyes. But this is not the normal ebb and flow of the political parties, what Tucker noticed is a fundamental shift that will doom the Dem Party to minority status if the trend continues.

Because the poll, and this is not from a conservative polling outfit, shows only 29% of independents support Biden but even more fatal, 67% of Hispanics do not support Biden. The poll found only 33% of Hispanics support Biden. 33%. For a Dem Party dependent on winning a big majority of the Hispanic vote to even come close in elections, these numbers spell doom.

Tucker said: “So you may not have noticed because the people in charge of diverting your attention are working overtime right now, and honestly, they’re pretty good at their jobs, but if you look around, pay a little closer attention, you will notice that Joe Biden’s political support is in the process of collapsing completely.

“The new Marist polls out, it shows that only 29% of independents support Joe Biden. That is a very bad number. How bad is it? For perspective, in the last election, Donald Trump took 41% of independent voters and lost.

“So if you’re a political consultant, a poll that shows 29% independents support sends you immediately to the liquor cabinet for more vodka. It means your candidate is going to lose along with everyone who’s connected to your candidate. You’re looking at this tsunami forming on the horizon aimed at you. It’s terrifying.

“But for Joe Biden, that’s just the beginning of the bad news.

“That same Marist poll shows Biden at 33% among Hispanic voters. In other words, 67% of the so-called Latino community does not support Joe Biden. It’s hard even to process a number like that. It’s just too far from the conventional view of American politics. Is there a single political analyst in this country who would have predicted that even last week?

“Upon that assumption, hang all the Democratic Party’s hopes for the future.

“Now we learn it isn’t true. It’s not even close to true. In fact, it’s approaching the opposite of the truth. So how are Democrats going to respond to this new reality?

“Look for CNN contributors to start attacking Hispanics just as they’ve been attacking whites for the past several years. They’ve got a new enemy now, and it speaks Spanish.

“In the meantime, you really cannot overstate, because it’s literally impossible to overstate, the level of panic a poll like that must be inducing at the Democratic National Committee. If the Democrats aren’t the party of non-White voters, which is what they said, they were probably even what they thought they were.

“Then what are they?

“The advisers around Joe Biden understand this perfectly well. If these new polling numbers are right, even if they’re just sort of right, this is the end of the Democratic Party as a governing majority. It’s bewildering to think that,” he said.

Tucker Carlson slams Biden’s “winter of severe illness and death” for the unvaccinated comment as being a distraction from the fact that his COVID policies are a failure. pic.twitter.com/NmJoAUJRMJ

Julian Assange is being punished for the crime of humiliating the ruling class. pic.twitter.com/1H8WRYXaGR

[VIDEO] Tucker Carlson Declares a "Pedo Outbreak" Over at CNN