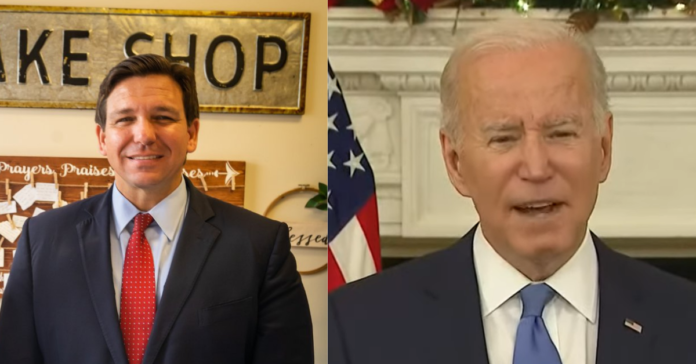 “If you look at how these major companies behave when faced with Chinese disapproval, they censor what the CCP tells them to censor and we see groveling apologies,” said Governor Ron DeSantis. “Go back a generation, and the idea of the American elites was, ‘If we allow China into the WTO and give them most favored nation status, that will make China more like us.’ This experiment has failed and it has endangered our nation’s national and economic security.

He continued: “I would like the SBA to survey the investments that are currently being done. When the legislature comes back they can make statutory changes to say that the Communist Party of China is not a vehicle that we want to be entangled with.

“I think that that would be something that would be very, very prudent. I also think that our country as a whole but certainly Florida would like to see more production and manufacturing re-shored and we would be a great place to do that.”

“For far too long, the communist regime in China has attempted to infiltrate our financial and educational institutions,” said Lieutenant Governor Jeanette Nuñez. “I applaud Governor DeSantis’ efforts that will curb China’s investment in industries critical to our national security and protect Floridians from the dangers posed by the Chinese Communist Party.“

“I appreciate Governor DeSantis’ asserting our seat at the table when it comes to how SBA, and its fund managers, decide on investments,” said Chief Financial Officer Jimmy Patronis. “A sad reality is that too many federal leaders for too long have been missing-in-action when it has come to holding China accountable.

“As Americans got our cheap goods, the Chinese government wasn’t playing by the rules when it came to intellectual property or trade. Meanwhile, they’ve been busy buying influence in Hollywood and Washington.

“Unfortunately, between COVID and the supply chain issues, we’ve seen how reliant our country has become on China.

“I take my fiduciary responsibilities seriously and I think the SBA needs to start asking harder questions when it comes to whether investing anymore in China is a good idea. It seems limiting our exposure to China is not only good for our country, but it is the financially prudent thing to do for our state.”

“Chinese government control and influence over businesses operating in China should be a source of concern for anyone investing there,” said Attorney General Ashley Moody. “As fiduciaries, we should understand these risks and ensure they are being evaluated by the Florida Retirement System.”

DeSantis issued a statement that said:

“Today, Governor Ron DeSantis held a meeting of the State Board of Administration where he, CFO Jimmy Patronis, and Attorney General Ashley Moody moved to revoke all proxy voting authority that has been given to outside fund managers, to clarify the state’s expectation that all fund managers should act solely in the financial interest of the state’s funds, and to conduct a survey of all of the investments of the Florida Retirement System to determine how many assets the state has in Chinese companies.

“By retaking control of the state pension fund’s proxy voting from outside fund managers who may pursue social ideologies inconsistent with the state’s values or the financial interests of the state’s investments, and by determining the state’s exposure to Chinese investments, the actions taken today will further strengthen Florida’s fiscal footing and signal to those in corporate America who prop up a genocidal, authoritarian, imperialist regime that they will not do so with Floridians’ money.

“The votes taken today by the Board of Administration build upon Governor DeSantis’ actions earlier this year to combat woke corporate ideology and malign foreign influence.

“In August, Governor DeSantis placed Ben & Jerry’s parent company Unilever on the state’s List of Scrutinized Companies that Boycott Israel following the company’s announcement that it would remove its products and prohibit the sale of its ice cream in Judea and Samaria. Read more here.

“The idea of American elites was if you let China into WTO, that’ll make them more like us. U.S. elites are the #1 reason China is so powerful. Not only have we NOT influenced China to be more like the Western tradition — but China is influencing the West.” @GovRonDeSantis today pic.twitter.com/Ty0nZ5GARB

I was proud to join @GovRonDeSantis to deliver a simple message to the woke fund managers who keep investing in China: we intend to assert our seat at the table. Limiting our exposure to China is not only good for our country, but it’s the prudent thing to do. pic.twitter.com/sfFNIERZ10

GOP Rep Tells Adam Schiff To Go Pound Sand: “I decline this entity’s request, this entity is illegitimate and not duly constituted under the rules of the US House of Representatives”