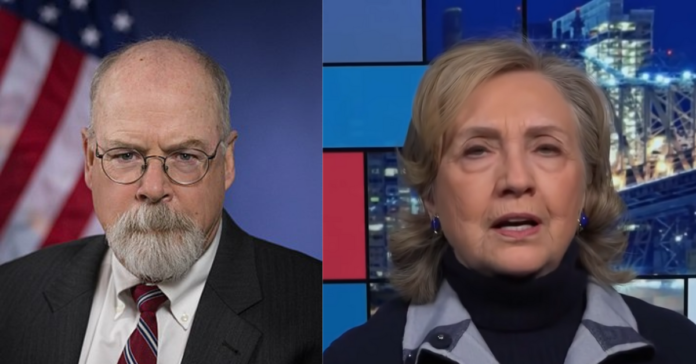 Special counsel John Durham just gave Hillary Clinton some terrible news when he told a federal court that he is looking at members of Hillary Clinton’s 2016 presidential campaign as part of his ongoing probe.

Durham’s team asked a judge in the court filing to “inquire into a potential conflict of interest” between the lawyers for the main anti-Trump dossier source, Igor Danchenko, and a separate lawyer at the same firm that “is currently representing the 2016 ‘Hillary for America’ presidential campaign, as well as multiple former employees of that campaign, in matters before the special counsel.”

Durham says the conflict is real because at some point the interests of Danchenk may diverge from Hillary’s campaign. If they squeeze Danchenko and he has information to give up on Hillary’s campaign’s involvement, Durham wants to make sure the lawyers don’t get in the middle and screw it up.

Durham argues the interests of the Clinton campaign and Danchenko “could potentially diverge in connection with any plea discussions, pretrial proceedings, hearings, trial, and sentencing proceedings.”

Durham lists some issues that may cause a split in the filing saying: “On each of these issues, the interests of the Clinton campaign and the defendant might diverge.”

The potential conflict of interest issues are:

The Clinton Campaign’s knowledge or lack of knowledge concerning the veracity of information in the Fusion GPS reports sourced by Danchenko,

The Clinton Campaign’s awareness or lack of awareness of Dancehnko’s collection methods and sub-sources,

Meetings or communications between and among the Clinton Campaign, Fusion GPS, and/or Steele regarding or involving Danchenko

Danchenko knowledge or lack of knowledge regarding the Clinton Campaign’s role in and activities surrounding the Fusion GPS reports, and

The extent to which the Clinton Campaign and/or its representatives directed, solicited, or controlled Danchenko’s activities.

Steele source Igor Danchenko is now represented by lawyers who worked for the Hillary Campaign.

Special Counsel John Durham is asking the court if that’s an improper conflict.

Notable: trial inquiry may include whether the Clinton Campaign directed Danchenko’s activities. pic.twitter.com/vczgWX5ih0

The Clinton Campaign and Danchenko might have an incentive to shift blame to each other for the false info provided to the FBI. pic.twitter.com/CVeTUgbWCV

Also at issue might be whether the Clinton Campaign knew the dossiers sourced by Danchenko were fraudulent.

What makes all this curious?