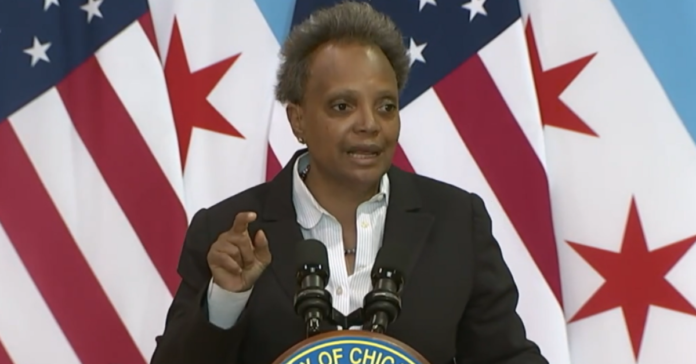 In a speech on Monday, Chicago Mayor Lori Lightfoot called for federal help to save the city from rising violent crime and from failed progressive policies that allowed too many violent criminals released.

According to The Chicago Tribune, ‘Lightfoot called for U.S. Attorney General Merrick Garland to send additional agents from the Bureau of Alcohol, Tobacco, Firearms and Explosives to go after illegal guns and more prosecutors to bring additional criminal cases at the federal level.’

She said: “I know people are scared. How many more have to die before there is an end to this dangerous practice of letting violent, dangerous offenders out into the very communities in which they are alleged to have caused harm, often without meaningful supervision, or in the absence of any meaningful intervention?

“Keeping you safe is my priority — not one of, but the first and primary priority. I wake every morning with this as my first concern and I push myself and all involved to step up and do more and better because we cannot continue to endure the level of violence that we are now experiencing.

“No one mayor or police superintendent can do this alone. We need partners, and partnerships that are broad and deep.

“That is a great disappointment to me personally, the superintendent and all involved. No excuses. We must do better.

“We have taken stock, analyzed the data and will be making the necessary changes going into the new year. None of us will rest until we bring peace to our city.

“Violence and crime are the manifestations of deeper problems. They are the offspring of poverty and neglect and the psychological trauma that comes with it.

“I have and will commit every bit of law enforcement muscle to fighting this fight. But, I also know that lasting peace and safety will only come to this city when the underlying root causes of violence and crime are also addressed once and for all,” she said.

Chicago aldermen were not impressed with the failed mayor and predicted another failure for Lightfoot.

“I thought it was light on specifics for an action plan, for what we’re going to do about the ongoing crisis and street crime, gang-related violence, gang-related shootings, carjackings and armed robbery,” said 2nd Ward Alderman Brian Hopkins.

“For me, what I find most disappointing is that the mayor did a lot of asking but not a lot of leading,” said 15th Ward Alderman Ray Lopez.