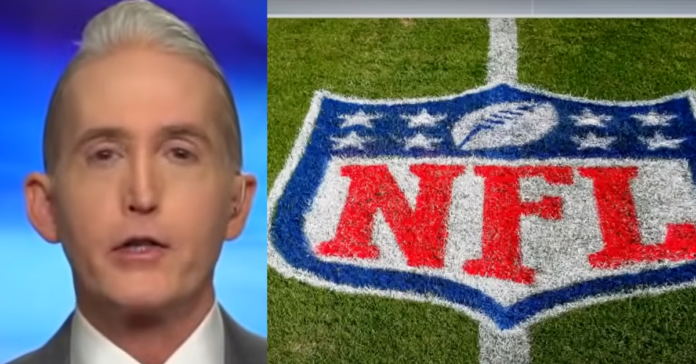 Trey Gowdy called out the National Football League after discovering the wealthy league has been giving money to groups pushing to defund the police and abolish prison as part of the NFL’s “Inspire Change” initiative.

Trey said: “The NFL is an entity that will fine you for having your shirttail out, or wearing the wrong socks. They fine players for violating the dress code, the NFL penalizes you if you breathe too hard on a quarterback or hurt the quarterback’s feelings.

“Touch a referee, and you are gone for a long time. You know what happens if you throw a punch in the NFL? You go to their version of prison. It’s the hypocrisy of building a league based on rules and penalties and referees and punishment, then wanting to do away with that on the larger playing field of life.

“There are more cops on an NFL football field than anywhere else in the country. They are called referees.

“Do you know what happens if you even criticize a referee? You get fined.

“So why would a league built on rules and punishment want to eliminate the people who enforce our rules and our punishments?”

“My guess is the folks in the stands and buying merchandise and paying for NFL channel will be surprised to learn their money is going toward crazy things like defunding police and abolishing prison.

“Throw out the rule book. God forbid someone’s shirttail comes out we can’t have that kind of crime.”

“Our 33 social justice grant partners have been selected based on the critical work that they have done surrounding Inspire Change’s four pillars, education, economic advancement, criminal justice reform, and police & community relations, to break down barriers to opportunity, end systemic racism, and bridge the gap between members of law enforcement and the communities they serve.

“We stand by the work our grant partners have done and the lasting positive impact made in communities across the country,” he said.

Trey Gowdy torches ‘hypocrisy’ of the NFL funding anti-cop groups: ‘Get rid of your own referees’https://t.co/rwscsCNxvv

Believe It Or Not, But US Prosecutors Are Quietly Working To Break Up Antifa Cells