Just when you think Biden’s Handlers can’t be any more out-of-touch or stupid, they prove you wrong with one of the most absurd and offensive moves ever, especially days before Christmas, and while their candidate is tanking in the polls.

So, what did they do this time?

They put out one of the most disgusting, vulgar, and divisive statements any sitting (so-called) “president” has ever issued.

It was so bad, that a left-wing journalist, actually spoke up, with a “WTF are you doing?” type tweet.

Here’s the statement Joe’s WH put out that has the nation reeling. You can read the full statement here.

Trust me, many Americans, both vaxxed and unvaxxed are stunned and disgusted by this statement.

Left-wing reporter Olivia Nunez actually called out the admin for the grotesque messaging, asking who exactly that message is for, and pointing out that unvaccinated Americans would not be persuaded by this type of messaging.

Here’s what Olivia said: “Who is this for? Unvaccinated Americans are not going to be persuaded by messaging like this. ”

Who is this for? Unvaccinated Americans are not going to be persuaded by messaging like this. https://t.co/he3jvfEgnz pic.twitter.com/ZI365x4hlB

Olivia, who used to work for BuzzFeed and is now a DC correspondent for the uber left-wing New York Magazine, is spot-on. This is just nasty and wrong on every level.

A massive chunk of unvaccinated people are minority Americans, for the love of God. But regardless, this is no way to speak to any Americans, period.

But it actually gets worse…

But, what really has everyone shocked, is the response that just came out from the White House, who responded to Olivia’s tweet.

WH chief of staff and the man thought to be one of Joe’s strongest “Handlers” just said this to Olivia’s tweet:

The truth is the truth. https://t.co/uUpRA9L13U

Talk about doubling down on stupidity and divisiveness.

And Ron got walloped for his response:

“Unvaccinated people are spreading the virus. They are putting themselves & their families & their communities at risk.”

“You do realize the unvaccinated are our family, friends and colleagues? Never a mention of long Covid. Hard to find and expensive tests. No counter campaign to the vaccine disinfo. What is this administration actually doing to mitigate the spread of Omicron and disinformation?”

“This isn’t truth. This is emotion driven propaganda with the sole intent to divide. Your own data shows the unvaxxed won’t get vaxed because you threaten them. You know the purpose of this is to dehumanize people and further divide the nation.”

“Truth? You mean like this? Lmao. There’s a big reason we don’t trust you people.” 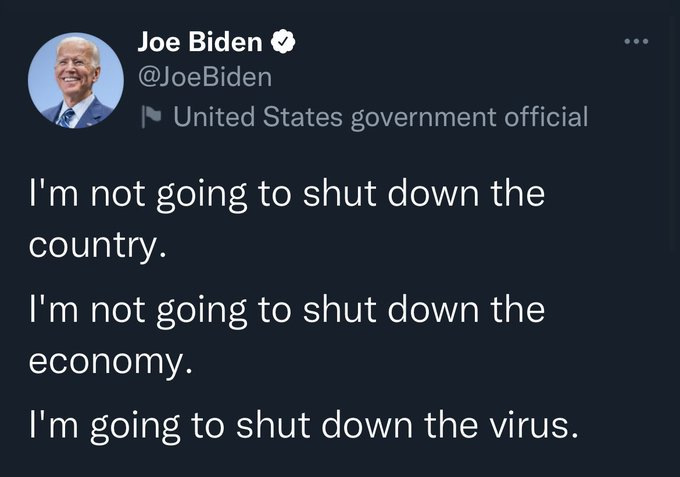 You can feel the frustration coming from Biden’s team. Their polls are in the toilet, “Let’s Go Brandon” is on the radio, prices are skyrocketing, and COVID is out of control.

Never in my lifetime have I seen such a group of bumbling clowns.

Do I think some of this is on purpose? Sure. But overall, these are inept boobs who are in over their heads and are just throwing poop at the wall and praying it sticks.