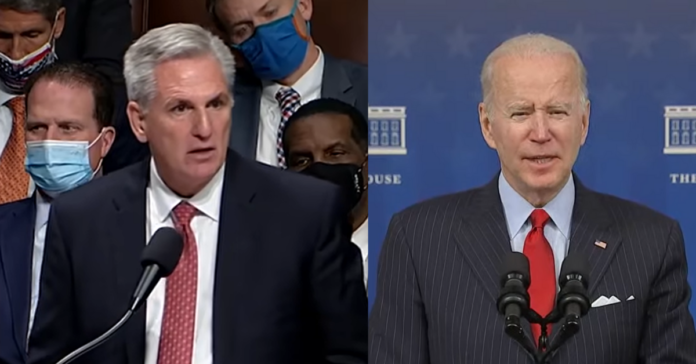 California Republican House Minority Leader Kevin McCarthy gave President Joe Biden some bad news after word leaked that Kevin has lined up 7 investigations into Joe Biden and his admin when the GOP wins the House in 2022.

McCarthy is readying the investigations now so he can start holding Biden accountable on day 1. It is also the smart move as Biden will surely fight any information requests and subpoenas, but unlike Pelosi, Kevin cannot count on Merrick Garland to enforce his subpoenas.

So McCarthy will have to move fast and get Biden’s people in court, where they will lose just as Trump’s people did, early so Biden and his team can’t run out the clock. The probe’s McCarthy will launch include the NSA allegedly spying on Tucker Carlson and Biden’s ongoing disaster at the border.

Kevin also wants to investigate what the FBI and DOJ did regarding the ‘threat of violence against school board members.”

The Investigations planned by House Republicans, are, according to Axios:

IRS: Leak of a “vast cache of IRS information” about billionaires to ProPublica.

Parents: Attorney General Merrick Garland’s vow to mobilize the FBI against “threats of violence against school board members,” after the National School Boards Association used the phrase “domestic terrorism.” The association apologized for its letter.

COVID: Origins of the virus, and CDC communications about school closures and mask mandates.

Afghanistan: Decisions behind the withdrawal, and an accounting of Americans who remain stranded.

What’s next: McCarthy plans to beef up staff, counsel and other resources to be ready to extract information beginning Day 1 if the GOP gets the gavel.

The House Republican plan when we’re back in the majority:
✅ Rein in the IRS
✅ Fund the police
✅ Secure the border
✅ Put American energy first
✅ Stop the runaway spending
✅ Pass a Parents Bill of Rights