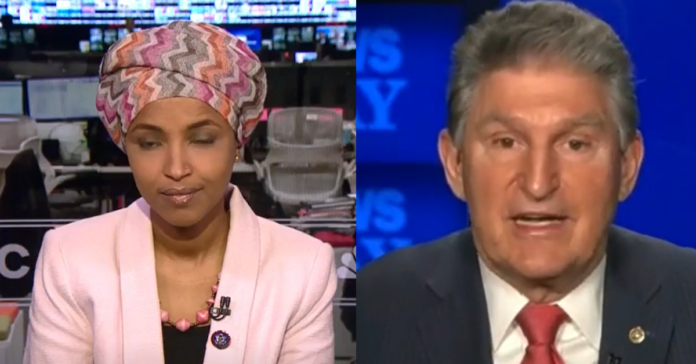 Ilhan Omar and many others in the Dem Party are furious with Dem Senator Joe Manchin for breaking with the Dems to sink AOC and Omar’s dream bill, Biden’s Build Back better spending package.

Omar said: “I mean, we all knew that Senator Manchin couldn’t be trusted. The excuses he just made, I think, are complete bullsh*t. It is really disheartening to hear him say that he has been trying to get there for the people of West Virginia because that’s a complete lie. The people of West Virginia would greatly benefit from their families having access to long-term elderly care and care for folks with disabilities.

“They would benefit from the expansion of the child tax credits. They will benefit from having access to pre-k. There are just so many things that, you know, the people of West Virginia desperately need. And we know that he is not working on behalf of their interests, and I really am just completely disappointed and disgusted by his reasoning.”

Sen. Joe Manchin (D-W.Va.) said on “Fox News Sunday” that he will not vote for Biden’s “mammoth” spending bill Build Back Better.

“You have the debt we’re carrying, $29 trillion. You have also the geopolitical unrest that we have. You have the COVID, the COVID variant. And that is wreaking havoc again. People are concerned.

“I mean I’m with my family. I know everyone is concerned. So when you these things coming at you the way they are right now, I’ve always said this, if I can’t go home and explain it to people of West Virginia, I can’t vote for it.”

“He knows that I’ve had concerns and the problems I’ve had,” he said of Biden.

“The thing we should all be directing our attention towards is the variant of COVID we have coming back at us in so many different aspects and different ways.

“So I think that’s where our attention needs to be directed toward immediately,” he said.

“That’s not being genuine as far as I’m concerned with my constituents in West Virginia,” he said.

Manchin released a statement after appearing on Fox News that said:

“Despite my best efforts, I cannot explain the sweeping Build Back Better Act in West Virginia and I cannot vote to move forward on this mammoth piece of legislation.

“My Democratic colleagues in Washington are determined to dramatically reshape our society in a way that leaves our country even more vulnerable to the threats we face.

“I cannot take that risk with a staggering debt of more than $29 trillion and inflation taxes that are real and harmful to every hard-working American at the gasoline pumps, grocery stores and utility bills with no end in sight.

“If enacted, the bill will also risk the reliability of our electric grid and increase our dependence on foreign supply chains.

“Our ability to quickly and effectively respond to these pending threats would be drastically hindered by our rising debt,” he said.

Let’s be clear: Manchin’s excuse is bullshit. The people of West Virginia would directly benefit from childcare, pre-Medicare expansion, and long term care, just like Minnesotans.

This is exactly what we warned would happen if we separated Build Back Better from infrastructure. https://t.co/dhzcSk0qUV

Manchin’s full statement on BBB. He leans in heavily on the national debt (which Biden says his proposal wouldn’t increase). He also talks about a 2010 debt warning from Adm. Mullen (debt service costs are up since then but still well, well below levels seen in the 80s and 90s). pic.twitter.com/j3GBGFjZbL

Judge Jeanine Pirro Sends 'Christmas Carol' Message To Nancy Pelosi: “The question for Ebenezer Scrooge, our own Nancy Pelosi, is whether redemption is even available to her”