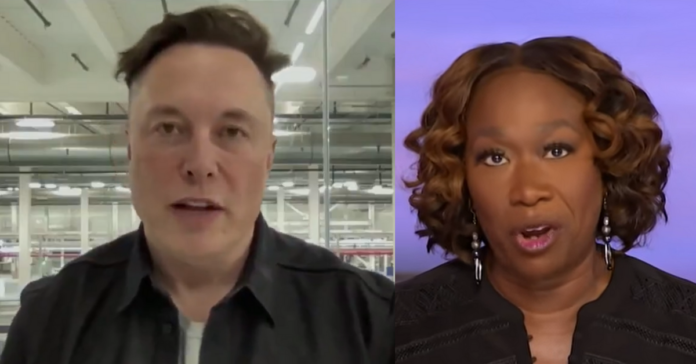 Tesla CEO Elon Musk called out MSNBC host Joy Reid after she spread more misinformation on her show with zero repercussions. Musk was not happy Reid and Elizabeth Warren were calling him a freeloader after he just paid more taxes than anyone in American history.

Liz Warren said to Joy Reid: “But you know the part that makes me angry about this? It’s on behalf of every public schoolteacher, every waitress, every computer programmer, every street cleaner who actually paid taxes and that means they paid more than Elon Musk did in federal income taxes.

“And that’s just not right. And it means the system is broken. But the days when these guys not only get to rake it all in but then rub everybody else’s nose in it while they head off in outer space.

“And declare how they did this all on their own when they were subsidized by the federal government and subsidized by every waitress and public schoolteacher who paid their taxes.

“This is wrong. And Elon Musk needs to eat a big dish of that,” Warren added.

Joy said on her show:

“For so many reasons- being a freeloader – and a selfish and disrespectful one – and for misappropriating Black vernacular for misogynistic purposes, Elon Musk is the absolute worst.”

Enter the smartest man in the world, Elon Musk, who said:

“If you opened your eyes for 2 seconds, you would realize I will pay more taxes than any American in history this year.”

Elon linked to a tweet about Joy Reid’s fake hacking scandal that allowed her to keep her job with the caption:

“Has the FBI found the people responsible for hacking Joy Reid’s old blog yet? Total hoax yet she’s never paid a price for it.”

“(Lack of) Joy Reid is a lobbyist for Sen Karen,” Musk added.

He also said: You remind me of when I was a kid and my friend’s angry Mom would just randomly yell at everyone for no reason. Please don’t call the manager on me, Senator Karen.”

(Lack of) Joy Reid is a lobbyist for Sen Karen

Joe Biden And Chuck Schumer Throw In Towel, Give Up On Passing Build Back Better In 2021