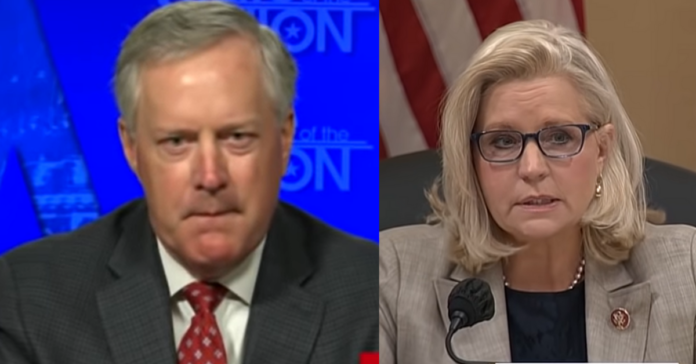 Former White House chief of staff Mark Meadows broke his silence over Congress finding him in criminal contempt. Speaking to hundreds of state legislators from around America in Atlanta, Meadows told the Congress to go pound sand saying he will not be intimidated by their tactics

Meadows said: “You’re not here by accident. You’re here with a special purpose and a calling on your mind. Each one of you who are here have overcome obstacles to serve your state, your country, and your family. It has not all been a bed of roses.

“What the enemy means for evil, He will make it good. I say that because tonight on the House floor, the Democrats are going to send a clear message that not only should I be referred for criminal contempt but that anybody who is a conservative and supported Donald Trump should be ashamed. They’re not going to intimidate me.

“I want to encourage you because I’m encouraged tonight. Oh my goodness, in the midst of very difficult circumstances personally, I am so encouraged, because we have freedom fighters from across the country gathered here tonight.

“But there are three stages to a Freedom Caucus and I just want to let you know because many of you are just embarking on it–whether it’s in Georgia or the eastern bloc from Illinois.

“We got all five conservatives from Connecticut here. You guys have been so unbelievably warm and gracious to me, and I know many of you are praying for me, and as we’re here.

“There are a group of Freedom Caucus members on the House floor debating and fighting for a friend of theirs because of what they see happening to him which is wrong and should not be happening.

“I also want to let you know that the Freedom Caucus—now, many of you know the personalities.

“Those individuals were not welcomed at the normal parties. In fact, many times where the Republicans have their regular gatherings, they didn’t get the invite. Now, many of you may feel the same way because right now they’re having all the wonderful get togethers where they work on redistricting and they try to maybe leave you out—I don’t know if that’s hitting too close to home or what—but as we see this there’s all kinds of legislative tricks they use to reduce your voice.

“There’s three stages to this. The first is they when you decide to do your Freedom Caucus they’re going to pat you on the head and say, ‘Good for you, you’ll never amount to anything.’ I mean they will. They’ll discount you.

“They’ll say it’s not going to happen. Ultimately, what has to happen is you have to stick together and not be discouraged. You have to have the procedures on your side and know the procedures and the legislative operational tricks—and I use the word tricks in a tactical way, meaning the way you add amendments and make it difficult for some of your–well let’s say less principled colleagues—the ones that have backbones of bananas rather than backbones of steel. I want more backbones of steel.

“So at first they’ll discount you. Then all of a sudden you’ll stick together, and there is a second phase of your caucus where they’ll try to co-opt you.

“You see them, all of a sudden they start getting little bills, find their way through committee. They get them all the plum assignments for committees.

“Now I’m here to tell you you can go from being not relevant to being invited to the table in a very short period of time.

“By a very short period of time, when it came to the House Freedom Caucus, it took us two years. Two years to show we were willing to stick together.

“Nothing good happens in Washington, DC, other than recess.

“I am more than a believer that a state Freedom Caucus will change the way we do things.

“Fundamentally if you’re not willing to be in the fight, there is no reason to get elected to office” he said.

Juan Williams claims "the GOP is an anti-America party"