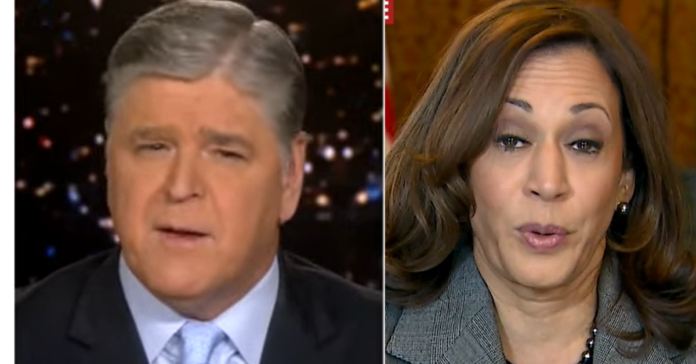 Sean Hannity called out Vice President Kamala Harris for being terrible at her job last night on Hannity. Sean said: “In fact, no vice president in U.S. history has a lower approval rating than Kamala Harris.

“Maybe that’s because the vice president is terrible at her job. Ever since she was appointed border czar nine months ago, Harris has done nothing to resolve the crisis. Yet another massive caravan is headed our way and Kamala Harris has no plan of action, no resolution, no future plans to visit the border, absolutely nothing. By the way, is anybody surprised?

“According to reports, Harris often refuses to read briefings, is frequently unprepared for daily challenges as vice president.

“Instead of actually doing her job, The border czar now spends countless hours berating her own staff, according to numerous reports. Allegedly, Kamala Harris is such a menace that some are openly referring to her as a soul-destroying bully. Ouch.

“Now, of course, amid lashing out at her own employees, Kamala also found time to redecorate her own office with carefully curated art pieces.

“Apparently, according to Kamala, the border crisis can wait. Her office was in desperate need of a makeover,” Sean said.

Harris also just announced $1.2 billion in investments for Central America, not America, to try to stop the flow of migrants.

One of the new initiatives announced today will be for Nespresso to support coffee-growing in Honduras and El Salvador. Harris also bragged about a $100 million commitment to Central America by Mastercard and commitments by CARE International, Grupo Mariposa, Parkdale Mills, JDE Peet’s and PriceSmart.

PepsiCo and Cargill are also making commitments in response to Harris’ “‘call to action’ in May.

Pepsi will drop $190 million to make updates to its manufacturing base in the region. No word on whether these updates and the other investments will be to bring in robots so even more migrants try to come to America, but if Kamala is in charge you can expect the worst.

Harris’s office also said that Cargill, a global food corporation, would invest an additional $150 million in the region with the aim of improving “farmer livelihoods and building economic resilience” in Honduras, Guatemala and El Salvador.

Meanwhile, Parkdale Mills, one of the largest providers of spun yarns and cotton consumer products in the world, plans to spend $150 million to build a new yarn spinning facility in Honduras, according to Harris’s office.

The Newly "Woke" Salvation Army is Struggling, "Our Situation is Dire"