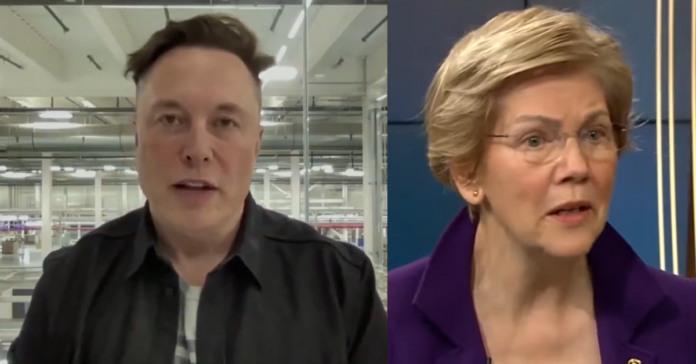 Tesla CEO Elon Musk fired back at Dem Senator Elizabeth Warren after Warren took some cheap shots at Musk after he was named Time Magazine’s Person of the Year. Liz said: “Let’s change the rigged tax code so The Person of the Year will actually pay taxes and stop freeloading off everyone else.”

Elon responded by tweeting out a Fox News article calling Warren a fraud. Musk added the caption: “Stop projecting!” He added: You remind me of when I was a kid and my friend’s angry Mom would just randomly yell at everyone for no reason. Please don’t call the manager on me, Senator Karen.

Warren made her uninformed comment – Musk took a Twitter poll to determine whether he should sell off a bunch of Tesla shares to pay taxes as he was being accused by the likes of Warren of underpayment. The public told him to sell and he did, yet Warren persists loudly.

It may be jealousy as Warren linked to an article about Time Magazine naming Musk its Person of the Year.

Musk has spent a lifetime defying the haters; now, it seems, he’s finally in position to put them in their place. For 2021 was the year of Elon Unbound.

In April, SpaceX won NASA’s exclusive contract to put U.S. astronauts on the moon for the first time since 1972. In May, Musk hosted Saturday Night Live.

In October, car-rental giant Hertz announced it planned to add 100,000 Teslas to its fleet.

The juvenile missives from his unmistakably phallic Twitter avatar came days after one of his rockets launched NASA’s first antiasteroid planetary-defense test; a few weeks before another launched a first-of-its-kind mission to study cosmic X-rays; and amid Musk’s sale of 10% of his Tesla stock, a process that roiled markets, cost him billions and should produce enough tax revenue to fund the Commerce Department for a year.

The sale was prompted by a Twitter poll Musk posted in a fit of pique over liberal Senators’ proposals to tax billionaires.

Many people are described as larger than life, but few deserve it. How many of us truly exceed our life span?

How many will make it into the digital textbooks our spacefaring descendants will study? As Shakespeare observed in Julius Caesar, it’s far easier to be remembered for doing evil than doing good. How many will leave a mark on the world—much less the universe—for their contributions rather than their crimes?

A few short years ago, Musk was roundly mocked as a crazy con artist on the verge of going broke.

Now this shy South African with Asperger’s syndrome, who escaped a brutal childhood and overcame personal tragedy, bends governments and industry to the force of his ambition.

Please don’t call the manager on me, Senator Karen 🙏

Elon Musk Fires Back At Liz Warren, Calls Her A Fraud: “Stop projecting, please don’t call the manager on me Senator Karen”