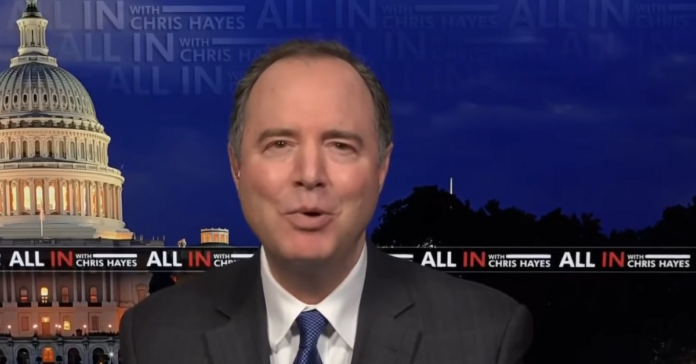 Adam Schiff got greedy and convinced the Federal Election Commission (FEC) to let him promote his new book by renting his massive campaign mailing list to his own publisher. Schiff’s book is called Midnight in Washington and the unusual arrangement the FEC agreed to will allow not only Schiff to make this controversial move but also other politicians.

The floodgates are open and others will surely follow Schiff down this shady path because politicians do not turn away free money.

The Daily Beast reported, “The decision allows Schiff’s publisher, Random House, to pay his campaign for access to email addresses collected over the course of the five-term Democrat’s time in office. Random House will use that list to target promotional materials to a narrowly tailored fan base, which, of course, includes supporters known to have previously given Schiff money.

“Schiff pitched the FEC on the matter in October—about a week after he published his first full-length book, Midnight In Washington—the announcement appeared in an FEC bulletin released Monday.

AO 2021-12: Campaign may rent its email list to a publisher at fair market value

Schiff for Congress (“the Committee”), the authorized committee of Congressman Adam Schiff, may rent its email list to a publishing company under the circumstances proposed by the Committee and Congressman to promote a book written by the Congressman. The rental is permissible under either of two proposed alternatives.

On October 12, 2021, Random House published a non-fiction book written by Congressman Schiff. The House Ethics Committee approved the publishing agreement between the Congressman and Random House.

The Commission concluded that, under the circumstances described in the request, both of the proposed rental arrangements are permissible under the Federal Election Campaign Act and Commission regulations.

The Commission did not agree on a rationale for this conclusion by four affirmative votes. In reaching this conclusion, Commissioners relied on different rationales, some of which are reflected in Agenda Doc. No. 21-37-A (garnering a vote of 3-3) and Agenda Doc. No. 21-37-B (garnering a vote of 3-3), but neither of those agenda documents is a Commission advisory opinion.

From The Well News:

After Random House recoups its publication and promotion costs, Schiff and Random House will each receive 50% of the net profits from the sale of the book.

Explicitly laid out in the agreement is that Random House’s activities will only involve “the publication, promotion and sale of the book” and “will not include any fundraising activity or solicitations for Schiff, Schiff for Congress or his upcoming bid for re-election in 2022.”

But in a letter dated Oct. 6., Stephen Kaufman, an attorney for Schiff, reached out to the election commission for an advisory opinion.

What he wanted to know was whether it was permitted under commission regulations for Schiff for Congress to either rent its email list directly to Random House to promote the book, or in the alternative, if the campaign could rent the list to Schiff, for the same use, with Random House later reimbursing him the cost.

.@RepAdamSchiff is free to rent the email list compiled by his principal campaign committee, Schiff for Congress, to promote his new memoir, “Midnight in Washington,” the @FEC said in an advisory opinion.https://t.co/eSFpYJJwaI