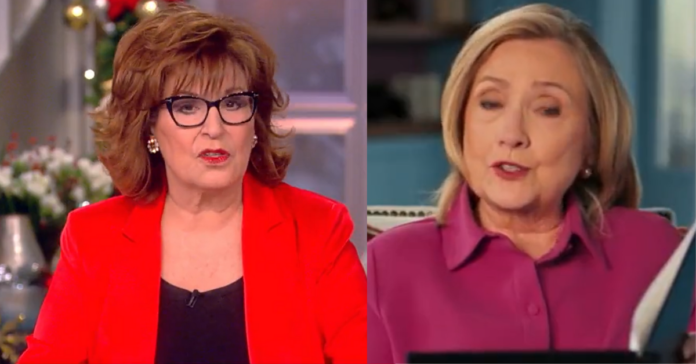 Joy Behar and the other ladies on the View gave up the game when they said Hillary Clinton did win in 2016. They were responding to Hillary’s inexplicable new ‘Masterclass’ where she offers to relive her humiliation at losing the 2016 election for paying customers. She even reads the speech in this class that she had planned for her big victory before reality came crashing down and sent her back to New York a two-time presidential loser.

“Yeah, no question,” co-host Sunny Hostin said. Behar whined that she was still not over Clinton’s loss saying Hillary won the popular vote as if that matters.

“She was so brave. I thought she was so brave,” Hostin said about Hillary reading her big loser speech for cash. What planet do these women live on?

“I didn’t, as you know, write a concession speech because even though we had a lot of bumps in those last 10 days, I still thought we could pull it out. So I worked on a speech that was really about my journey.

“I wanted to be as helpful as I could to the viewers and to the process of being in a MasterClass.

“As a way of making it clear that, yes, I would be the first woman president,” said Clinton of her planned victory speech.

“But I, like everybody, stood on the shoulders and lived the lives and experiences of those who came before us.”

Hillary then read the speech she never gave because she lost the election. She said getting emotional:

“I’m going to face one of my most public defeats head-on by sharing with you the speech I had hoped to deliver if I had won the 2016 election.

“I dream of going up to her, and sitting down next to her, taking her in my arms, and saying ‘Look at me, listen to me, you will survive, you will have a good family of your own, and three children, and as hard as it might be to imagine, your daughter will grow up and become the President of the United States.

“I am sure of this as anything I have ever known:

“America is the greatest country in the world.

“And from tonight going forward, together, we will make America even greater than it has ever been, for each and every one of us.

“Thank you, God bless you, and may God bless America.”

HILLARY CLINTON READS 2016 “VICTORY” SPEECH: In a class on resilience, Hillary Clinton read the presidential speech she would have given had she won and fought back tears while talking about telling her late mother that she became the first female president – the co-hosts react. pic.twitter.com/xOo9W2nQlS

Hillary Clinton gets emotional as she reads her “would have been” 2016 victory speech pic.twitter.com/ClAHdVsyoD

Should I make this my new ringtone? pic.twitter.com/Q7vTVfrloQ