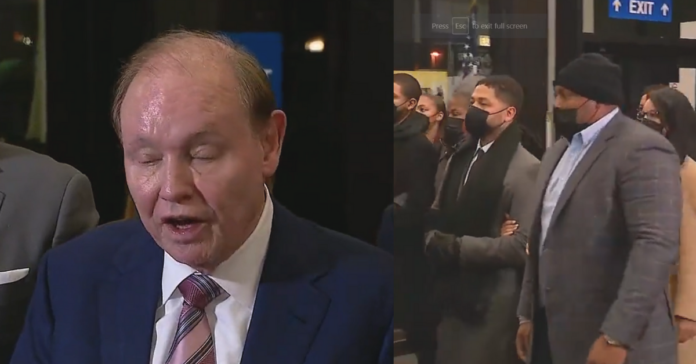 A furious and victorious Special Prosecutor Dan Webb put Jussie Smollett on notice over the Hollywood star lying on the witness stand and said he may hit him with perjury charges. Webb said after winning convictions of 5 of the 6 counts Smollett was charged with:

He added that while it is rare for someone who was convicted to get hit with perjury charges he said he would wait and see what to do in this case as he “just got the verdict 30 minutes ago.” He did not seem happy that Smollett lied under oath and said he would bring the lies up at sentencing.

“I felt it was also important for the Cook County judicial system to get a trial. Whether we won or lost a trial was not the issue,” Webb added.

“What was the issue is that what Mr. Smollett had done in this city should be aired in front of a public trial where all the evidence comes out,” Webb said.

Webb said: “Mr. Smollett would not have lost this case, had the jury not concluded that he’d lied to them. The fact that he came up with a completely ridiculous story to explain his misconduct did not affect the verdict.

“After hearing all the evidence, whether what Mr. Smollett was right or wrong was very controversial.

“Whether we won or lost the trial was not the issue, what was the issue was that what Mr. Smollett had done in this city should be aired in a public trial, all the evidence comes out, but the true facts, I thought, needed to come out.

“We’ve now won this case. We’ve come away with the jury agreeing that they should have heard the case, and he’s now been found guilty.”

Smollett is facing 3 years for each count for a total possible sentence of 15 years. Most experts do not see the judge handing down that harsh of a sentence but with Webb furious that Smollett had the arrogance to get up there and lie under oath all bets are off.

“The Jury has spoken. While this case has garnered a lot of attention, we hope as a county we can move forward.

“At the Cook County State’s Attorney’s Office we will continue to focus on the important work of this office, prioritizing and prosecuting violent crime.”

“For Mr. #Smollett to get up in front of them (the jury) and lies for hours and hours and hours that really compounded his misconduct…but defendants do not have the right to go in front of a jury and lie under oath.: – Special Prosecutor Dan Webb #JussieSmollett #Smolletttrial pic.twitter.com/ITNxj7Kdoo

Prosecutor: not only did smollett lie to police and wreak havoc on city but he compounded by lying to jury

The press scrum around Webb is asking if Smollett should face perjury charges for lying on the stand. Webb says he’ll bring it up at sentencing, but otherwise doesn’t know.