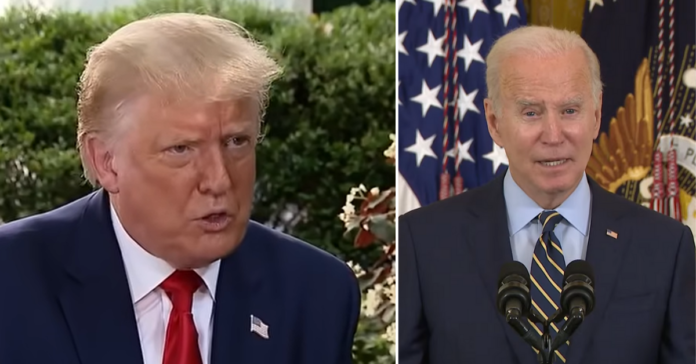 Former President Donald Trump disputed the recent claim by a Washington Post reporter that was echoed by Biden’s chief of staff Ron Klain that the media is tougher on Biden than they were on Trump.

“They are treating him with kid gloves,” Trump said when asked about the shocking claim. “The media treats Biden as badly as, or worse than, Trump. Here’s proof” wrote Dana Milbank in the Post. “Submitted for your consideration,” Klain, Biden’s chief of staff said when he shared the story on Twitter.

Trump said: “We’ve done things that nobody has ever done. Peace in the Middle East—we would have had that also, but we had four countries sign. We would have had peace—the Abraham Accords, it’s called.

“So many different things. I will say, at the end, people are starting to see we did a massive amount of work, whether it was military or taxes or all the different things we did. We had a great economy with no inflation.

“I did it twice because I had to rebuild it after COVID hit the world. The world was hit actually relatively harder than us. I think it’s not even a contest.

“I think they’re treating him with kid gloves. You know why? There’s so much damage that has been done to our country, and this new bill, this Build Back Worse bill, is just a disaster—a disaster for the country,” Trump said.

Trump continued bashing Mitch: “I regret I didn’t run somebody in the primary against him because he’s been terrible.

“He could have used it, and he would have won. It’s a powerful thing. He gave it away today for nothing. He got nothing from it.

“Also, breaking up the bill was a disaster because it made it much easier to get this catastrophe that’s getting ready to come—they’re not going to be able to be stopping it. If you kept it together, it was tougher to get the votes.

“Then, of course, he gave them a two-month extension. What was that all about? That gave them time to get their act together, and they did.

“They’ll probably be passing this other one, and I’ll say more then probably; it’s going to be almost definitely passing. With the debt ceiling, he could have killed the other one. He could have said no debt ceiling, we’re not going to go along with it unless you stop with the Build Back Worse bill.

“What a shame, including McConnell. He should have said, You got to finish the wall or we’re not going to do it, and they would have done it,” Trump said.