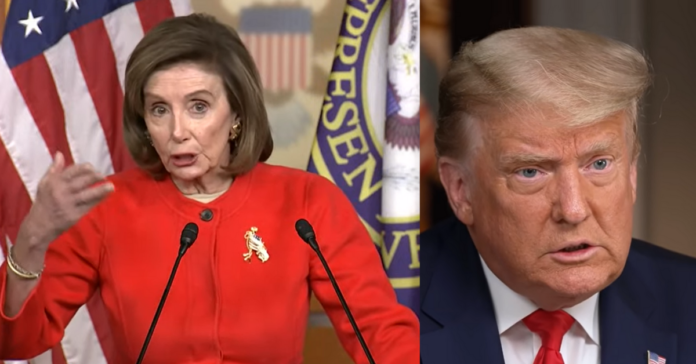 Peaker Nancy Pelosi used to love getting in front of the cameras to say she was praying for former President Donald Trump. It was an odd thing to say and odder still how she said it, like a southerner saying ‘bless your heart.’

“Well, I’ll never forgive. I’ll never forgive former president of the United States and his lackeys and his bullies that he sent to the Capitol for the trauma that was exerted on our staff. These are largely younger people who come with idealism to work in the Capitol on either side of the aisle and whatever it is.

“And for us who sign up for this when we run for office, it’s bad enough for our families to see the danger we’re in.

“But for these young people when I came back to the Capitol to say we’re going to open up government in the Capitol that night, we were going to honor our constitutional responsibilities even though they had an assault on that January 6 date fraught with meaning from the Constitution.

“When I saw what it meant to the staff, the way it traumatized them, it was frightening.

“That’s something that you cannot just say, well, we’ll do legislation to make sure this or that doesn’t happen again.

“You cannot erase that.

“So I have a lot of communication with staff with Capitol Police and the rest, so I know pretty much what people are thinking, not everything.

“And we must always be. It’s like an horizon.

“As far as civility is concerned, it would be a good place to start.

“If they didn’t start threatening the lives of of members of Congress from one of their members to the next and saying nothing about it.

“But civility is very important.

“I just met with the spouses and commended them for the role they play in civility because it really is just as you suggest to really important not only to the well-being in our communication, respect for each other, but also in terms of security,” she said.

.@SpeakerPelosi on if she thinks Capitol is safer than a year ago: “Of course I do. We’ll always ensure that is the case…I don’t think that whatever preparation anybody would have made that anybody could predict that the President of United States would incite an insurrection.” pic.twitter.com/25I7GbcYAK