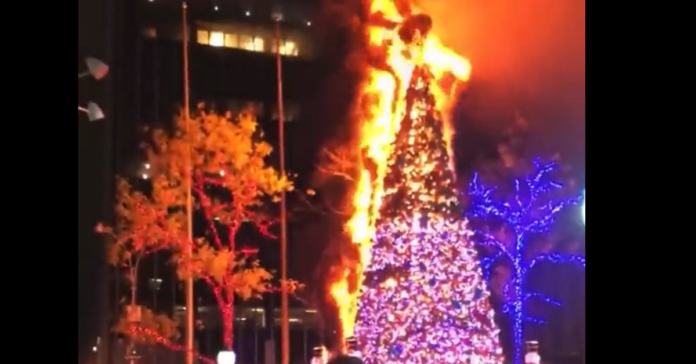 A man in his 40s has been arrested for allegedly setting the Fox News Christmas tree on fire. The tree is located just outside the company’s news center in Fox Square on West 48th Street and 6th Avenue.

The tree was just lit last Sunday. Fox News said the tree had 10,000 glass ornaments, 100,000 lights, and took workers 21 hours to put together. Fox News said its security spotted the suspect climbing the 50-foot-tall tree after midnight. NYPD officers got there in time to see the suspect, Craig Tamanaha, fleeing the scene of the crime.

He was charged with criminal mischief, reckless endangerment, and arson. New York City firefighters were able to put the fire out and Fox News said they will rebuild the tree. “This is just beyond tragic and angers everybody,” Brian Kilmeade said.

“Ultimately it comes down to what kind of a person lights a Christmas tree on fire,” co-host Steve Doocy said.

“This is part of a bigger problem,” Kilmeade added. He continued: “It’s the crime surge in this country.

“There is so much crime in places that were always safe including 48th and sixth here.

“This is emblematic of these cities out of control, defame and defund the police and this bail reform that has these men and women these assailants these suspects out before they can even finish the paperwork.

“This is what you get when you have these left-wing DAs running these cities, you get chaos.”

Tamanaha, 49, had three prior arrests: two for drug possession and one for public intoxication. He was said to be homeless with a last known address in Brooklyn.

There were no reported injuries in the fire. Police said the investigation was ongoing.

They said it was not clear whether the suspect may have used accelerant to quicken the spread of the fire.

JUST IN: @ShannonBream announces on @FoxNewsNight that Fox News’s Christmas tree has caught fire outside their HQ on the Avenue of the Americas. pic.twitter.com/Ah0OUfTrlE

.@ShannonBream offers an update on the Fox News Christmas tree, which caught fire earlier tonight: “The fire appears to be out for now. Moments ago, you could see it was engulfed in flames. No word of any injuries there. We saw the crews there, bravely fighting through this.” pic.twitter.com/Zs5ZUV3cMm