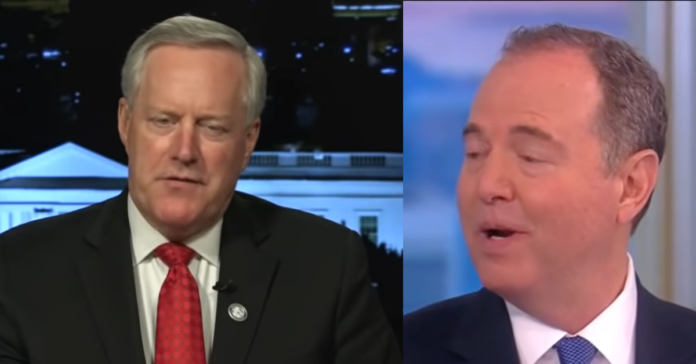 Former White House chief of staff Mark Meadows told Adam Schiff and Liz Cheney to go pound sand and said he is no longer cooperating with the House select committee’s probe into Jan. 6.

“In addition, we found that in spite of our cooperation and sharing documents with them they had issued unbeknownst to us, and not without even a courtesy call, issued a subpoena to a third party carrier trying to get information,” said Meadows.

“And so at this point, we, we feel like it’s best that we just continue to honor the executive privilege and it looks like the courts are going to have to weigh in on this.”

“Hopefully in the end they will see that I’ve tried to cooperate, but they failed to meet us halfway,” he added.

“We agreed to provide thousands of pages of responsive documents and Mr. Meadows was willing to appear voluntarily, not under compulsion of the Select Committee’s subpoena to him, for a deposition to answer questions about non-privileged matters,” Mark’s lawyer George J. Terwilliger II said.

“Now actions by the Select Committee have made such an appearance untenable.”

“In short, we now have every indication from the information supplied to us last Friday – upon which Mr. Meadows could expect to be questioned that the Select Committee has no intention of respecting boundaries concerning Executive Privilege,” Terwilliger added.

“As a result of careful and deliberate consideration of these factors, we now must decline the opportunity to appear voluntarily for a deposition,” Terwilliger said.

Terwilliger did say Meadows would answer written questions “so that there might be both an orderly process and a clear record of questions and related assertions of privilege where appropriate.”

Terwilliger said Meadows was looking to appear voluntarily before the committee and answer questions that Meadows believed were not protected by executive privilege.

Meadows is set to appear on “Hannity” Tuesday evening.

“Over the last several weeks, Mr. Meadows has consistently sought in good faith to pursue an accommodation with the Select Committee and up until yesterday we believed that could be obtained,” Terwilliger said in a letter to committee chair Rep. Bennie Thompson, D-Miss., and vice chair Rep. Liz Cheney, R-Wyo.

He noted that he and Meadows “consistently communicated” that Meadows could not make “a unilateral decision to waive Executive Privilege claims asserted by the former president.”

“We now must decline the opportunity to appear voluntarily for a deposition,” an attorney for Mark Meadows tells the Jan. 6 committee in a new letter.

Kyle Rittenhouse Fires Back LeBron James: “You know what, f*** you, LeBron”

'Corrupt Piece of Sh*t': Rittenhouse Says Kenosha Prosecutor Motivated Him To Want To Become A Lawyer