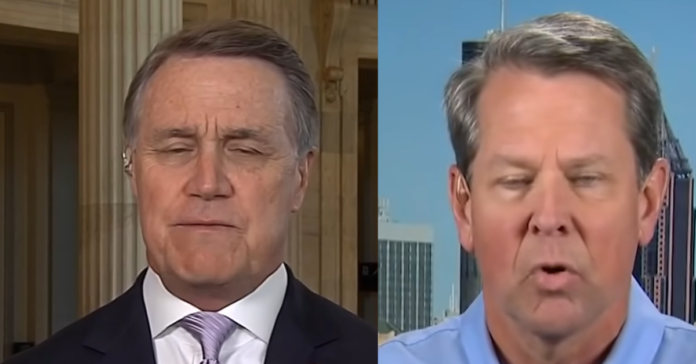 Former President Donald Trump has been pushing former Sen. David Perdue to challenge Georgia Gov. Brian Kemp in the GOP primary for some time. The winner is expected to face Stacey Abrams in the general election. Purdue has the name recognition as he served as a Georgia Senator and he can raise money.

With Trump’s endorsement, most believe he would be a lock to beat the incumbent Brian Kemp. Purdue has signaled he would not run leaving Kemp to say, “All I know is what Sen. Perdue has told me, I hope he’ll be a man of his word, but again that’s not anything I can control.”

Trump said: “Stacey ‘The Hoax’ Abrams has just announced that she’s running for Governor of Georgia. I beat her single-handedly, without much of a candidate, in 2018. I’ll beat her again, but it will be hard to do with Brian Kemp, because the MAGA [Make America Great Again] base will just not vote for him.

“I’m running for Governor because opportunity in our state shouldn’t be determined by zip code, background or access to power,” Abrams said. “We are One Georgia.”

According to a new report, Purdue will announce he is running tomorrow and will file the necessary paperwork.

Perdue, who was recruited to run against the governor by former President Donald Trump, intends to make his announcement Monday via video and file his paperwork at the same time, according to sources briefed on the plans.

The former senator has discussed getting additional fundraising and endorsement support from Trump and that it will be forthcoming, the sources said.

The looming Republican primary opens a new front in the Georgia GOP’s civil war, which traces back to Trump’s loss in Georgia in November.

Those divisions played a role in the twin defeats of both of the state’s Republican senators, Perdue and Kelly Loeffler, two months later in January runoff elections.

Sean Hannity called for Kemp to drop out of the race last week saying:

“Kemp has been very ineffective as a governor and frankly for the sake of the state of Georgia I think he should probably bow out of the race.

“I think the candidate to watch — and I hope he gets in — is former Senator David Perdue. He would be a much better candidate versus Stacey Abrams.

“If Kemp does stay in, that would also hurt Herschel Walker in his Senate race against Raphael Warnock. Kemp is not particularly well-liked. I don’t think he’d be a good top of the ticket person for the Republicans.”

Arizona Governor Doug Ducey, who is the chair of the Republican Governors Association, said: “We don’t fund losers. Won’t fund landslides. The RGA follows the 11th Commandment. We do not speak ill of another Republican.”

Mitt Romney Comes Out Of His Hole To Remind Us All Why We Can’t Stand Him, ‘It Smacks Of Virtue Signaling When…