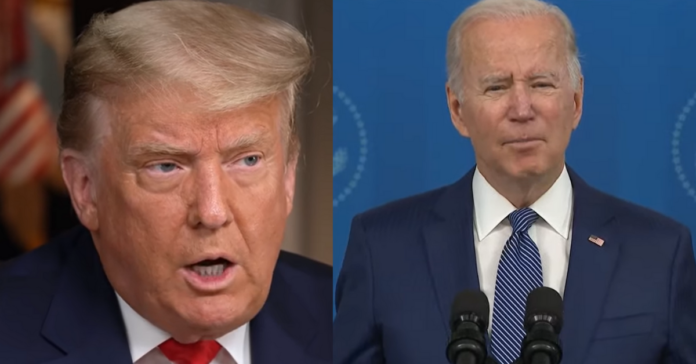 Former President Donald Trump sat for an interview on Orlando, Florida’s WDBO and said he did not expect Joe Biden to run again, ‘based on his performance.’

Trump graded the bumbling Biden Harris administration and gave them low scores. Trump said: “I would give them an F, if permissible, an F minus. Look, he’s gonna make a statement, and I don’t know if anybody knows what’s in their future.

“So I would think that maybe he wouldn’t be running, based on his performance. I would not imagine he would be running.

Trump also hinted that he will seek another term in 2024. “A lot of your listeners are people that will be very happy with what my decision will be I believe,” he said.

In March, Biden said: “Yes, my plan is to run for reelection. That’s my expectation.”

The pivot follows a month of bruising polls for Biden. His approval rating has consistently been in the low 40s and Americans continue to express negative views about the economy.

A recent NPR/Marist survey showed 52% of Americans disapproved of Biden’s approach to the issue, while 42% approved. Veteran Democratic strategists say that public sentiment signals it is time for a messaging shift.

No matter how frequently Biden says that jobs are returning, wages are rising and supply chain crunches are easing, White House allies say those arguments may never persuade Americans with financial anxiety that an economic recovery is underway.

“There’s plenty of good news out there that you can message off, but the problem is that many people, for whatever reason, are not feeling it, and you have to acknowledge that,” said Democratic strategist Jim Manley, who was a top aide to former Senate Majority Leader Harry Reid.

…Joe Lockhart, who was White House press secretary under former President Bill Clinton, said that the White House must also do the difficult work of making an economic case that is broader than Biden’s efforts to address inflation.

“If the Republicans get to define what the economic issues are, and they define it as inflation, then you’ve already lost,” he said.

NEW: Biden was forced to bring back Trump’s ‘Remain in Mexico’ policy by a federal court but his administration expanded who could be eligible for it.

“This is going beyond good faith implementation of the court order,” said one former Biden appointee. https://t.co/C1y7V0O7LF

Trump DOJ official Jeffrey Clark, who was slated to plead the 5th to the Jan. 6 committee tomorrow, won’t be coming in due to a medical condition, the committee says. December 16th is the new date pic.twitter.com/mmy7Rzoivu