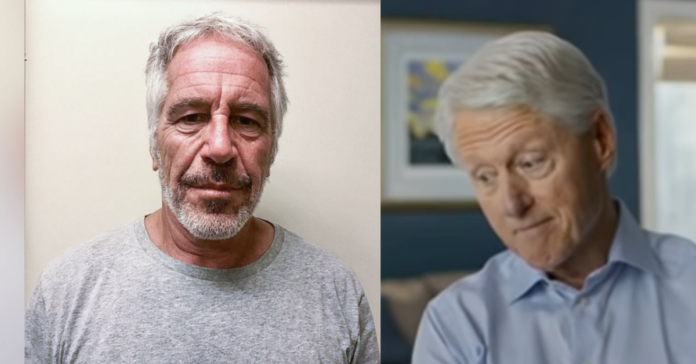 It should be noted that this was before he was arrested in Florida and got the sweetheart deal that saw him evade punishment for his crimes. But as Trump said, Trump kicked Epstein out of Mar a Lago because the guy was creepy, everyone knew he liked hanging around with young girls.

The Daily Mail got the logs from the Clinton library. From The New York Post:

Clinton has denied any knowledge of Epstein’s sexual misdeeds, but had maintained ties with him over the years and was said to have been a passenger on Epstein’s private jet several times, including once in 2002 when the ex-president was photographed with one of Epstein’s eventual rape accusers. Maxwell attended the 2010 wedding of Clinton’s daughter Chelsea.

Epstein’s other high-profile acquaintances include former President Donald Trump and UK Prince Andrew, both of whom had been passengers on his jet, a former pilot testified during Maxwell’s trial on Tuesday.

The visitor logs were obtained by DailyMail.com from the Clinton Presidential Library under a series of FOIA requests.

They show that Epstein’s first visit to the Clinton White House was on February 25, 1993 and the person who issued the invitation is listed as ‘Rubin’. The location of the visit is listed as ‘WW’, or West Wing.

The most prominent Rubin in the White House at the time was Robert Rubin, who took up his position as director of the National Economic Council when Clinton took office.

Rubin was so favored by Clinton that he was appointed Treasury Secretary in January 1995.

Rubin would go on to serve as chair of the Council on Foreign Relations (CFR), an international affairs think tank, between 2007 and 2017.

Epstein was a member of the CFR from 1995 until 2009 and donated $350,000 to the organization, money which it later gave to an organization which fights human trafficking.

The logs show that Epstein was admitted for his White House visit at 9:19am that day, when Clinton had plans to meet with Rubin at 1:45pm, according to the president’s daily schedule.

It is not clear if Epstein attended the meeting.

Romney Worried Trump May Win In 2024, Tells Dems How They Can Stop Him

Dukes of Hazzard Star Calls BS On Alec Baldwin: “What kind of idiots do you take us for, guns do not go off by themselves”