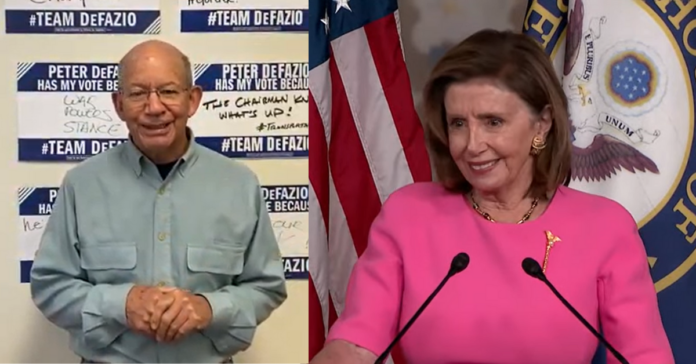 Rep. Peter DeFazio just dealt another huge blow to Nancy Pelosi and announced he will retire rather than run again. He is a senior Dem who currently leads the House’s transportation committee. He will retire after 36 years in Congress.

This is just the latest blow to Pelosi as the senior Dems who know how terrible it is to be in the minority get out now while they can. And while all the campaign accounts are full.

“The far left and the far right have gone too far. I’m interested in getting things done.

“I’ll work with anybody to actually solve problems and get things done for the people that I serve.

“It’s not about being politically correct, it’s about doing the correct thing.

“It’s always a concern, because it’s a swing seat, so you have to listen to all the people.

“It doesn’t matter. I’m running for governor because I believe this is the job I am made for,” he said.

In the last 13 days, five House Democrats have said they will retire or run for higher office next year. It began on November 16 with California’s Jackie Speier retiring, followed two days later by North Carolina’s G.K. Butterfield and then two days after that by Texas’ Eddie Bernice Johnson. Two days after that Vermont Rep. Peter Welch said he was running for the state’s open Senate seat. And then, on Monday, came the Suozzi decision.

Already two committee chairs (Bernice Johnson and Kentucky Rep. John Yarmuth) have made clear their plans to retire. That doesn’t usually happen if there is a belief within the caucus that they will continue to hold the majority.

National news is reporting Peter DeFazio is retiring. Sad news for Oregon. He was my Congressman my whole life and the best in the business. https://t.co/fL57ORHAVg via @politico

I am running for Governor of NY as a common sense Democrat who gets things done.

I have the track record, common sense approach to governing & bold new vision to get it done. I can do it, because I’ve done it! Please take a look at my video and share. https://t.co/0GiQIja1qr

“I’ll work with anybody,” (Suozzi) said. “It’s not about being politically correct. It’s about doing the correct thing to actually help people.” https://t.co/DWV4EchHxv

Jake Tapper Among Those Who Want Chris Cuomo Gone, Report