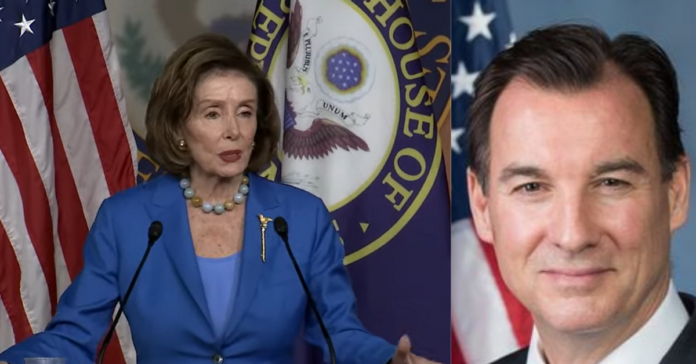 Nancy Pelosi suffered another big blow when New York Democratic Rep. Tom Suozzi announced he plans to retire rather than run again for his 3rd District seat. Instead, he will launch a longshot bid to be New York Governor after Cuomo resigned in disgrace.

Suozzi is the 18th Democrat in the House to retire or run for higher office in 2022. Republicans have only 11 members retiring. To show you how bad it is for Pelosi, at this point in the 2020 election cycle only eight Democrats retired and 20 Republicans had called it quits.

The GOP got swept in 2018 and the entire country believes the Dems will get crushed by a red wave in 2022. Suozzi said: “We’re really at a crossroads right now. We don’t need cheerleading, we need leadership.

“The far left and the far right have gone too far. I’m interested in getting things done.

“I’ll work with anybody to actually solve problems and get things done for the people that I serve.

“It’s not about being politically correct, it’s about doing the correct thing.

“It’s always a concern, because it’s a swing seat, so you have to listen to all the people.

“It doesn’t matter. I’m running for governor because I believe this is the job I am made for,” he said.

What’s equally troubling for Pelosi and her colleagues is that the rate of retirements within their ranks has increased significantly in recent weeks.

In the last 13 days, five House Democrats have said they will retire or run for higher office next year. It began on November 16 with California’s Jackie Speier retiring, followed two days later by North Carolina’s G.K. Butterfield and then two days after that by Texas’ Eddie Bernice Johnson. Two days after that Vermont Rep. Peter Welch said he was running for the state’s open Senate seat. And then, on Monday, came the Suozzi decision.

It’s important to not lump all of these retirements into one blob — as most of these members have extenuating circumstances influencing their decision.

Welch, for example, has had his eye on Sen. Pat Leahy’s Senate seat for years and was always going to run when it came open.

Butterfield found himself — thanks to Republican redistricters in the state — in a very tough district. Bernice Johnson, at 85, had been rumored as a potential retirement for the last several election cycles.

So there’s no one reason why all of these Democrats are suddenly retiring. But, you can be absolutely sure that the sum total of their retirements has an impact on their colleagues — and how they think about their own futures.

Already two committee chairs (Bernice Johnson and Kentucky Rep. John Yarmuth) have made clear their plans to retire. That doesn’t usually happen if there is a belief within the caucus that they will continue to hold the majority.

I am running for Governor of NY as a common sense Democrat who gets things done.

I have the track record, common sense approach to governing & bold new vision to get it done. I can do it, because I’ve done it! Please take a look at my video and share. https://t.co/0GiQIja1qr

“A former four-term mayor of Glen Cove and a two-term Nassau County executive, Suozzi is now in his third House term — and a common thread runs through his career: His approach to governance is far more utilitarian than ideological.” https://t.co/1bgScwvmSn

“I’ll work with anybody,” (Suozzi) said. “It’s not about being politically correct. It’s about doing the correct thing to actually help people.” https://t.co/DWV4EchHxv